MOSCOW, 1 February. The Ministry of transport of the Russian Federation expects in the coming days to negotiate with Poland on a cargo transportation, reported to journalists the Deputy Minister of transport Nikolay Asaul.

“We expect that in the coming days such an agreement will be reached”, – he said, commenting on the situation with the cessation of transportation between Russia and Poland. 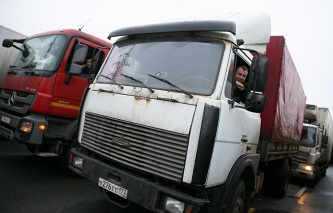 February 1 has expired permits for cargo transportation, which annually between Russia and Poland. The parties failed to reach agreement on new permissions, so the truckers of the two countries Monday can’t cross the border.

“We have been exchanging bilateral permits, permits for transport of goods from third countries and transit permissions. Moreover, we pose the question before the Polish party that the transit is necessary to allow, without restrictions, to refuse permission. We have three years acted in the “transit without limits”, that is, the permits were issued, but in any number, according to the needs of each party,” said Asaul.

The Ministry of infrastructure and the construction of Poland at noon (14:00 MSK) will begin another round of talks on granting permits for trucking between the two countries. The situation will be discussed at the expert level in the framework of the mixed Commission on cooperation in the sphere of international road transport. As reported by the Polish Agency, “the positive outcome of these negotiations will make possible a meeting between the Deputy Minister Jerzy Schmidt and Deputy Minister of transport of the Russian Federation Nikolay assaul”. “Tentatively it is scheduled for 2 February,” – said the press service of the Ministry.