MOSCOW, 1 February. The Moscow city court today upheld the arrest of informal leader of the leftist movement “Autonomous action” Dmitry Bochenkova, accused of participation in mass riots on Bolotnaya square. About it reported in a press-service of the court. 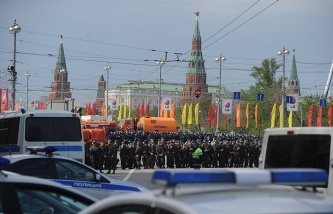 “The court upheld the decision of the Basmanny court without change, the appeal without satisfaction”, – said the Agency interlocutor.

The defense asked to overturn the decision of the trial court authorizing the arrest. Earlier Basmanny court has prolonged term of arrest Bochenkova to 2 June. He is charged with participation in mass riots and assaulting a police officer.

The case about mass disorders on Bolotnaya square in Moscow was initiated after the events of 6 may 2012, when permitted by the authorities of the opposition rally turned into clashes with police. For illegal actions were arrested more than 400 people, injured more than 30 police officers. Several dozen people were injured. A criminal case was opened under article 212 of the criminal code – Mass riots and article 318 of the criminal code – “Violence against representatives of authorities”. In total, the main so-called “Bolotnaya case” there were about 30 people. In some of them the criminal prosecution terminated as a result of the Amnesty declared to the 20 anniversary of the Constitution of the Russian Federation.