MOSCOW, 1 February. Cargo transportation through the territory of Turkey by the Russian vehicles due to end on 31 January 2016 expiry Turkish permissions of 2015, according to the Association of international road carriers (ASMAP). 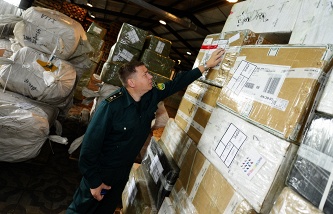 “Until now, the Turkish side is not agreed the contingent of permits for 2016. Currently, the Ministry of transport of Russia takes steps to resolve the issue – the Turkish side repeatedly sent proposals for the exchange of permissions”, – stated in the message AIH.

According to the transport Minister Maxim Sokolov in December 2015, the number of issued permits for bilateral road transport from Turkey to Russia will be reduced by four times. According to him, this decision will affect the business of trucking. In this case, when the reduction of trade turnover between Russia and Turkey, which was also accounted for in the government decree, in a natural way and reduced the number of haulage.

Limiting the number of permits

Permits for road transport the Ministry of transport issues the road carriers Association, which then distributes them among the players, said Sokolov.

Earlier, the Russian government has placed a resolution, including, limited the number of permits for Turkish carriers on 2016 up to 2 thousand units and did not exclude the possibility of cancellation of already issued for the next year permits.