MOSCOW, 2 February. The international operators plan to open in 2016 in Russia and CIS countries hotels with a total room stock of approximately 7.4 thousand rooms, including 64% of them – 4,7 thousand numbers will appear in Russia, study says JLL. 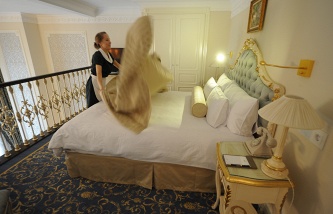 Sobyanin: Moscow has issued the documents for the construction of over 60 new hotels

According to a study from 4,7 thousand rooms, announced to launch in Russia, almost half (2.2 thousand rooms) is in Moscow. If all announced projects, the quality supply in the Moscow hotel market will increase to 25 thousand rooms.

The largest new hotel sites in 2016 in the capital should become a project in the area of the Kiev station that combines three brand – Adagio, Ibis and Novotel (room 701 together).

In St. Petersburg, where last year did not open any branded hotel, for 2016 announced just three – the first Hampton by Hilton Expoforum and the first in the country Jumeirah and Wyndham. The total room stock of these objects is 395 rooms.

In regional cities announced the launch of 1 thousand numbers. In Nizhny Novgorod is expected to put into operation two hotels together, 360 rooms, one unit should go on the market in Voronezh (220 rooms), Novosibirsk (218 rooms), Volgograd (158 rooms) and Rostov-on-don (81 rooms).

“Following the demand, developers are primarily trying to focus on bringing to market room stock in a more affordable price segments. According to our estimates, this category includes nearly a third announced for 2016 new supply – 2.4 thousand rooms,” said the head of the Department of hospitality JLL Tatiana Veller.

She noted that the implementation of the projects planned to open this year, was started long before the devaluation of the ruble, which began in 2014. Considering the average length of the construction cycle of three to four years, the real effect of the current economic situation, according to Weller, can be seen not earlier than 2018-2019.