The anti-crisis plan of the Cabinet includes two parts, the first of which is aimed at overcoming the consequences of the adverse impact of external economic environment, said Prime Minister of Russia. 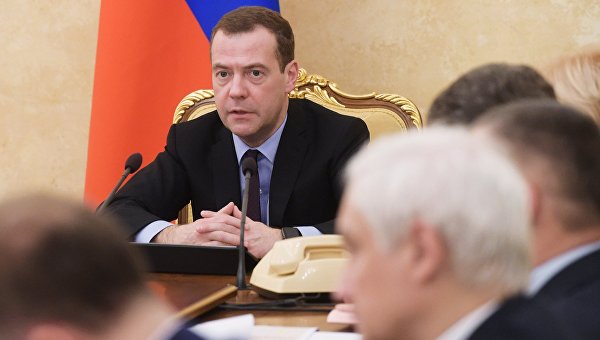 SLIDES, 2 Feb.Prime. The government is now preparing an action plan aimed at ensuring sustainable socio-economic development of the Russian Federation in 2016, includes not only solutions to the crisis, but also structural measures to create a reserve for economic development in the medium term, said Prime Minister Dmitry Medvedev.

“Last year, let me remind you that this plan is informally called crisis. This was largely true. The new document, of course, can be described with these same words, but, on the other hand, it differs from previous first of all by the fact that in addition to anti-crisis solutions contains a significant package of proposals, which aims to lay the groundwork for stable economic development in the medium term”, — said Medvedev at a meeting on the formation of the “anti-crisis plan for 2016”.

According to him, structural measures devoted an entire section of the plan.

Earlier at the meeting, Medvedev said that the anti-crisis plan of the Cabinet includes two parts, the first of which is aimed at overcoming the consequences of the adverse impact of external economic conditions.

“Here you have the second section deals with structural measures to achieve sustainable growth. The proposed solution must have a positive impact on the regulatory environment, lead to lower costs in the economy. The aim is to achieve further improvement of the business environment in Russia and, of course, to improve the investment climate. This work should continue,” said the Prime Minister. He noted that a separate theme of the plan is to support small and medium businesses.

“The project envisages measures for legislative provision of the decisions made, deadlines for introduction of bills in the state Duma. Today we will go over the main sections of the project. If there is something not accounted for that could be taken into account, I emphasize, that could be taken into account, of course, such proposals can be made. Decide on some large, discuss the effectiveness of decisions,” Medvedev said.