MOSCOW, 2 February. The Secretary of the General Council “United Russia”, Deputy Duma speaker Sergei Neverov believes that the appointment of Alexei Dyumin acting Governor of the Tula region will provide new impetus to development of the region.

“The appointment of Alexey Dyumin acting Governor of the Tula region will provide new impetus in the development of the region, in which there are enterprises of strategic importance”, – said Neverov to journalists. 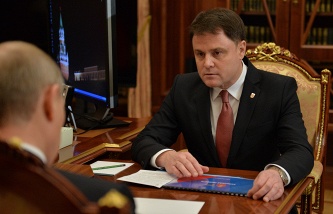 Putin accepted the resignation of Gruzdev, Tula Governor at his request

He pointed out that Dyumin is “figure at the Federal level, which is well acquainted with the military – industrial complex”. “And this is an important component of the economy of Tula region, which provides jobs and ensures social stability,” said Secretary of the General Council of the party.

Earlier the President of Russia Vladimir Putin accepted the resignation of the Governor of the Tula region Vladimir Gruzdev, who asked the President to release him from his duties as Governor. Putin instructed to perform the duties of the head of the region before the elections Alexey Dyumin, who before this appointment the post of Deputy Minister of defense.

The advantage of the former Deputy defense Minister Alexei Dyumin that he is not involved in any “design” of local elites. This opinion was expressed in an interview with the head of the Fund of civil society development (Fcsd) Konstantin Kostin.

According to Kostin, the situation in the Tula region is quite stable, although for 4.5 years Governor Gruzdev there were intra-elite conflicts and complaints from small businesses. However, “those changes that have occurred (Gruzdev), are positive,” he said.

I Dyumin, according to the head of Fcsd, has “impressive experience of public administration”. “It is extremely important that he worked in the Ministry of defense, because the region has many military-industrial enterprises, and that he is not involved in any regional militia design that will allow it to be equidistant from all groups of interests in the region and to work effectively in the interests of the population”, – said Kostin.

In the final rating the efficiency of governors Fcsd published in late January, Gruzdev was shared with the four heads of the regions 51-54 of the place, with 57 points out of a possible 100. Thus, compared with the rating for 2014, its position has deteriorated by 10 points.