The text of the document published on the official portal of legal information. 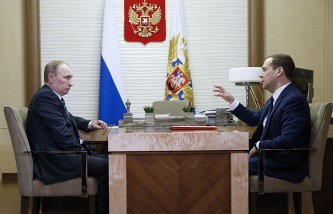 Functions of Rosgranitsa, according to the decree, transferred to the Ministry of transport of the Russian Federation.

To abolish the Department has proposed to the Prime Minister of the Russian Federation Dmitry Medvedev. “One of the proposals concerns the abolition of state agencies under the name of Rosgranitsa, she was engaged in the development of the state border from the point of view of construction and transportation technologies, was established some time ago, part of the task performed”, – said the head of the Cabinet of Ministers at a meeting with Putin.

According to Medvedev, “without compromising quality, the same functions can be performed in the framework of the Ministry of transport, which can depart and functions of Rosgranitsa”.

Putin asked why the Prime Minister proposes to transfer the functions of the; the Ministry of transport.

“The fact that most of the powers were engaged in Rosgranitsa, linked to the transport function, the industrial construction of this kind is closer to the Ministry than to any other structures,” Medvedev said. According to him, “you can post it (the function), but the Ministry of transport it is the closest thing we agreed on as the most appropriate form of organization of this activity for the future.”