MOSCOW, 2 February. Russia in 2015 year, Turkey has put in more than 3,122 million tons of wheat, which is 29,3% less than in the previous year – then the country imported 4 million 412.2 thousand tons of Russian wheat. This was reported in the Ministry of agriculture with reference to data of the FCS. In monetary terms the volume of deliveries amounted to approximately $568 million (by the end of 2014, this figure amounted to $1,048 billion). 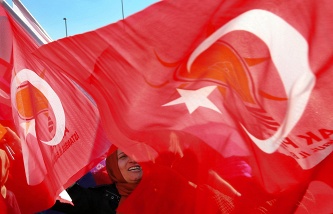 Turkish Minister: Ankara can do great harm to Russia, refusing to import its wheat

Total exports into Turkey of agricultural products amounted to $1.8 billion (in 2014 – $2.4 billion), said the Ministry of agriculture.

According to the Ministry of agriculture, by the end of 2015 Turkey took the second place on volumes of purchases of Russian wheat (2014 – first). In first place is Egypt, purchased in the past year, more than 4.6 million tons of wheat worth more than $862,4 million

In third place in the top ten on the volume of purchases of wheat from Russia, as in 2014, is Iran – in 2015, the country imported from Russia more than 1.5 million tons of wheat at $by 301.7 million (in 2014 a total of 1.33 million tonnes worth $320,3 million). Also in the top ten major buyers of Russian wheat in 2015 included (in descending order) Azerbaijan, South Africa, Nigeria, Bangladesh, Yemen, Georgia, Kenya.

Just in the 2015 calendar year, Russia exported more than 21 million tons of wheat worth about $4 billion, follows from the data of the FCS.

Earlier, the head of the Ministry of agriculture of Turkey, Faruk Celik said that in case of refusal to import Russian wheat damage the Russian economy may amount to more than a billion dollars. The relevant Minister’s statements cited in the Monday report of the newspaper “Hurriyet”.

According to the head of the Turkish agriculture Ministry, Russia buys from Turkey fruit and vegetables for $750 million “we Have purchases in the Russian Federation only one item – wheat, $1.1 billion If we stop the imports from Russia, will inflict much more damage. But we do not, we are patient,” said çelik.

24 November 2015 in the skies over Syria near the border with Turkey the Turkish air force was shot down Russian bomber su-24M. After that the Russian President Vladimir Putin warned that the attack on the bomber would have “serious consequences” for bilateral relations. According to the decree on special economic measures against the Republic of Turkey, the country from 1 January 2016 can’t deliver to Russia a number of fruits and vegetables, including tomatoes. In addition, ban the importation of frozen parts of carcasses and offal of turkeys and chickens. Also banned Turkish fresh cloves and salt.