MOSCOW, 2 February. The Kremlin continues to refuse to comment on the video with former Russian Prime Minister Mikhail Kasyanov, who laid out in Instagram the head of Chechnya Ramzan Kadyrov. 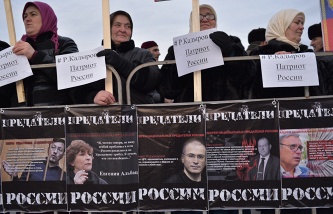 “Still I’m not going to say anything about Kadyrov”, – told reporters the President’s press Secretary Dmitry Peskov. He said that while not meant to give any comments.

In response to Kasyanov’s own words about what he expects Putin’s reactions to the video clip, the representative of the Kremlin has noticed that “it is his (Kasyanov) right” – to expect such a reaction.

Yesterday Peskov said that the Kremlin does not follow Instagram the head of Chechnya. “We don’t follow Instagram Kadyrov, so nothing you can’t say on this issue”, – told reporters the President’s press Secretary Dmitry Peskov.

Kadyrov posted on Instagram a video image Kasyanov, the movements of which see “through the scope”. The post is provided with a recording: “Kasyanov arrived in Strasbourg for the money to Russian opposition. Whoever does not understand, he will understand”.