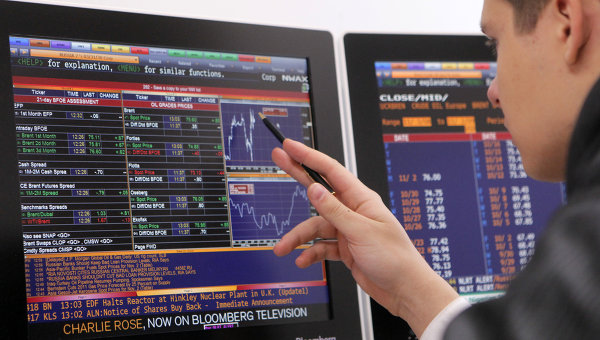 MOSCOW, 2 Feb. Elena Likova. The Russian stock market on Tuesday dropped on the major indexes amid falling ruble and Fitch cut its Outlook on the dynamics of Russian GDP by 2016, analysts say.

“The Russian stock indexes fell on Tuesday after Fitch cut its Outlook for growth of Russian GDP by 2016 from -0,5% to -1%,” — said Mikhail Krylov from “Golden Hills — Kapital AM”.

The loss of the MICEX look more moderate thanks to the interest of investors in the shares of metallurgists, adds the analyst of “InstaForex” Igor Kovalev.

Shares of Aeroflot were corrected after yesterday’s growth vosmibratov, notes Vitaly Manzhos from the Bank “Education”.

“The reason for recent purchases was the news that the heads of several large companies, including “Aeroflot” took part in meeting of Russian President Vladimir Putin with the economic block of the government about privatisation. However, yesterday we heard news about further privatisation of the airline,” he commented.

During the day the MICEX index is likely to fall to 1730 points, the dollar-rouble will rise in price for 2,4 rubles, and the RTS index will drop to 667 as the price of oil is going for another 3% lower, says Mikhail Krylov from “Golden Hills — Kapital AM”.

“Against the backdrop of the fall of the ruble in the economy possible competition for a share of the agricultural market, which will benefit those who have increased production volumes and ensured their demand. In Russia import substitution in response to sanctions has given the inertia of the production of fat (+22% per year), cheese (+17%), textiles and dyes (+15%), glass and glassware (+14%), meat (+13%), sugar (+12%), wines (+3%). From here it is possible to predict the interest of investors in the Cherkizovo group and organic chemistry,” he says.

Tomorrow the main driving force for global markets will remain quotations of “black gold”, which with high probability will continue to fall, Mikhail Abramov estimates of IK “Veles Capital”.

“It is important to add that tomorrow also scheduled publication of data on stocks of oil and distillates in the USA (18:30 GMT), in the case that stocks will decline, we do not exclude correction upwards. Other important events that could reverse the negative trend in the energy market, we do not expect,” he said.