MINSK, 3 February. /Corr. Larisa Klyuchnikova/. Belarus has banned pork imports from Crimea, where an outbreak of African swine fever (ASF). About this informed the Department of veterinary and food supervision Ministry of Belarus with reference to the Rosselkhoznadzor. 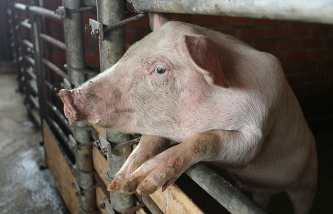 Aksenov: Crimean authorities to investigate the cause of occurrence on the Peninsula of the hearth ASF

“On February 3, temporary restrictions are imposed on the importation into the territory of Belarus from Crimea live pigs, semen of boars, pork, including wild boar, and products of its processing, leather, horn and hoof and raw intestines, stubble,” – noted in the Department.

In addition, the ban was imposed on feeds and feed additives of animal origin, including poultry and fish, forage additives for cats and dogs, as well as prepared feed for cats and dogs that did not undergo heat treatment and are made from raw materials originating from Crimea. The ban extends to second-hand equipment for keeping, slaughter and butchering of pigs.

The Department has indicated the need to adopt measures to provide biological protection for pig complexes and pig farms and farms of all ownership forms. The Department also announced the cancellation of all previously issued permits for import of specified goods from the Crimea.