MOSCOW, February 3. The head of the profile Committee of state Duma on civil, criminal, arbitration and procedural legislation Pavel Krasheninnikov considers a strange offer on deprivation of liberty of up to 6 years for members of political parties for obtaining foreign funding. “It’s quite strange with the current concept of the scale of punishment,” he said on Wednesday, commenting on the publication in the newspaper “Izvestia”. 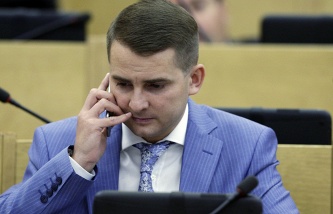 As announced on 3 February edition, the state Duma Deputy Yevgeny Fyodorov in the spring session will contribute to the consideration of the house amendments to the criminal code (CC) of the Russian Federation providing for the imposition of liability for members of registered parties for receiving payments from foreign individuals and legal entities, diplomatic missions and authorities of other States for carrying out political activities in Russia. As the MP noted, all of today’s legislative action withdrawing from the elections and administrative responsibility is not enough to effectively combat foreign influence on the political situation in the country. New article of the criminal code would provide for penalties of up to imprisonment for the term from 3 to 6 years.

According to Krasheninnikov, “it is clear that there were no prospects no such bill”. “No need to escalate the situation in this way, particularly before elections. There are other, more serious ways to attract attention”, – says the head of the Committee.

A similar view was expressed by the head of the Duma Committee on public associations and religious organizations Yaroslav Nilov (LDPR). He criticized the idea of assigning the status of “foreign agent” of individual politicians and the introduction of criminal responsibility for the financing from abroad of political party members. “I believe that without a clear mechanism for the implementation of this idea not very promising,” – said Nilov on Wednesday.

According to the MP, don’t know the mechanism that provides Fedorov. “For the financing of election campaigns from abroad individual candidates responsibility exists. Adequate she. If means criminal liability for engaging in political activities, there is a lot of questions for practice”, – said the head of the Committee.

In addition, he pointed out that in the case of the introduction of such norms, it will be easy to circumvent. “Even assuming that such a law will act, you will find other forms, for example, fees for lecturing,” said Nilov.