SAMARA, February 3rd. /Corr.TASS Alexey Sokolov/. On the basis of liquidated in Togliatti Volzhskiy machine building plant (VMZ, the “daughter” of AVTOVAZ), it is planned to organize production in the interests of “Roscosmos”. This was reported today in the government of the Samara region. 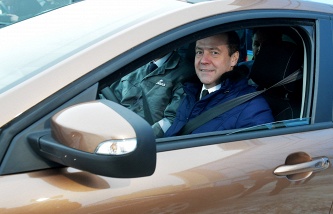 Medvedev swept through the plant “AVTOVAZ” for car LADA XRAY

“Based on tvms in Togliatti it is planned to organize the production of various tooling and dies used in the aerospace industry”, – said the Agency interlocutor.

The project plans to implement Samara plant “Metallist – Samara”, producing combustion chambers for liquid rocket engines and components of aircraft gas turbine engines. The required investment was not disclosed. Along with the organization of new production, the Samara company intends to retain the remaining frames of liquidated subsidiaries of “AVTOVAZ”. Previously worked on TVM more than 2.5 thousand people, but after optimization at the plant has about 700 employees.

In the project will assist the government of the region. The Governor Nikolai Merkushkin ordered the regional Ministry of industry to provide assistance for rental production areas TVM. On this issue, will hold talks with the leadership of “AVTOVAZ”.

In November 2014 TVM became a 100% subsidiary of AVTOVAZ. He supplied the giant components for Assembly of cars, industrial tooling, dies and technological equipment. On the TVM orders were placed, totaling about 1 billion rubles for the manufacture of tools and rigging for the release of new models of AVTOVAZ – LADA Vesta (“Lada Vesta”) XRay and LADA (“Lada, Ixray”). Here in 2014 was the $ 200 million to the tooling from the Corporation Nissan.

In September 2015, TVM announced the reduction at the plant more than 1 thousand employees. The reason for the reductions was the loss of one of the areas of activity – machine tools. In December 2015, it was announced on the elimination of TVM.

As reported earlier, the Chairman of the trade Union “AVTOVAZ” Sergei Zaitsev, on the basis of the TVM decided to create a new base unit, the production of technological equipment, which go only some of the employees of VSW.

In January 2015, the press center of “AVTOVAZ” reported that on the basis of equipment of Volzhsky machine building plant at the site of “AVTOVAZ” started production plant components for the family of LADA and GM.