NOVO-Ogaryovo, February 3. The President of Russia Vladimir Putin met on Wednesday in his residence in Novo – Ogaryovo former Secretary of state Henry Kissinger. This was reported by press Secretary of the Russian President, Dmitry Peskov.

92-year-old Kissinger, a former adviser to U.S. President on national security and former head of American diplomacy, was the initiator of the policy of ‘détente’ in relations between the USA and the USSR. In 1973 he was awarded the Nobel peace prize. 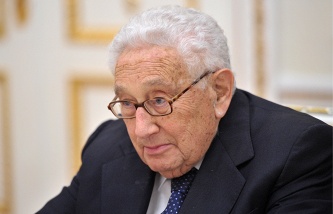 Henry Kissinger: West must realize that without the consent of the Russian Federation unity on Syria to achieve

Previously Peskov called the meeting of the President with the American diplomat continued their friendly contacts. “It’s a conversation in a continuation of long-standing friendly dialogue between President Putin and Henry Kissinger, who has long-standing relationships; they are constantly communicating, using the opportunity to talk,” said a spokesman, announcing the upcoming meeting. “Putin cherishes this opportunity to debate current issues in world politics, the exchange of views on the prospects of situation development in future”, – said the representative of the Kremlin.

Meetings of Putin and Kissinger reported by the media, was more than ten. In October 2013, taking the ex – Secretary of state in Moscow, the head of state assured that in Russia always attentively listen to the assessments of Kissinger regarding the development of the political situation in the world, calling the former Secretary of state “global politician”.