MOSCOW, February 3. /TASS /. The General Director and the basic owner “the Magnet” Sergey Galitsky plans to annually sell about 1% of the company’s shares. This is stated in the message Credit Suisse following the meeting with the businessman. 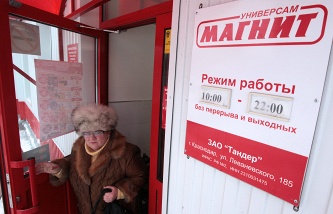 In February 2015 Galitsky through the structure Lavreno Ltd held an SPO, placing about 1% of the Charter capital of “Magnit”. As a result of placing the retailer has attracted about 9.8 billion rubles. These funds Galician planned to invest in the development of its other projects, particularly construction of a stadium for football club “Krasnodar”, whose owner he is.

During the meeting with investors Galitsky also said that the revenue of “Magnet” by the end of 2016 may increase by 20% compared with the previous year. In 2016, the company plans to open nearly 2.3 thousand new retail outlets, including 900-950 grocery stores, 80 hypermarkets and 1,200 cosmetics stores. Capital expenditures (CAPEX) will amount about 60 billion rubles.

Galitsky also told investors that the current economic situation imposes more serious requirements for new retail outlets and requires selective closure of stores is of the order of 30-50, mostly in Moscow. However, the deterioration of market conditions for small retailers creates an opportunity for M&A transactions (mergers and acquisitions), analysts at Credit Suisse.

The management style a “Magnet” is changing in the direction of granting more independence and responsibility of young managers, “grown up” within the company, said in a statement. Galitsky believes that this is the right path for further development, say investors on the basis of communication with the businessman.

“Magnit” is the largest by revenue and number of stores sales network in Russia. On December 31, 2015, the retailer ran 12 089 shops, including 9 thousand 594 store format “at home”, 219 hypermarkets, 155 stores “Magnit Family” and 2 thousand 121 cosmetics store. Net profit of “Magnit” under international financial reporting standards (IFRS) in 2015 grew by 23.4% compared with the previous year and reached 58,85 billion rubles, the Revenue of the retailer for the reporting period increased by 24.5% to 950,61 billion rubles.