The rental is expensive

Despite falling demand, prices of hot-rolled steel in Russia will rise in February by 5%, reported in the market overview became the company BCS. Domestic prices follow export with a lag of two months, and in global markets continues to rebound, analysts of BCS.

About the upcoming price increase warn consumers themselves and metallurgical company. “The stabilization of prices in export markets and the devaluation of the ruble will contribute to the growth of steel prices in the domestic market in February-March 2016,” — said in comments to operating results for the fourth quarter of 2015 Magnitogorsk metallurgical combine (MMK). The plant intends to February 1 to increase by 5% the prices of products for the domestic market, reported in late December, the magazine “metal supply and sales” with reference to sources close to CMI. In January, the CMI plans to raise prices Agency TASS confirmed a metal trader working with the company who added that the increase may be 7-10%.

The main consumers of hot-rolled and cold-rolled steel — engineers and manufacturers of automotive components. The representative of the largest Russian manufacturer of cars and tanks, Uralvagonzavod (UVZ), has confirmed that the CMI has already announced price increases for February of 2016, and with other producers — Severstal, NLMK, “metalloinvest” — the company is in negotiation, and preliminary analysis shows that they also intend to raise prices. By estimations of the representative of “Severstal” in February the price increase on the Russian market may reach 3-6% in hot rolled, cold rolled and long products distribution, 1-3% in the steel. In March, the company expects further price growth. According to BCS, to raise domestic prices for hot-rolled steel by 3,5–4% in February, planned and Novolipetsk steel (NLMK). The representative of NLMK declined to comment. 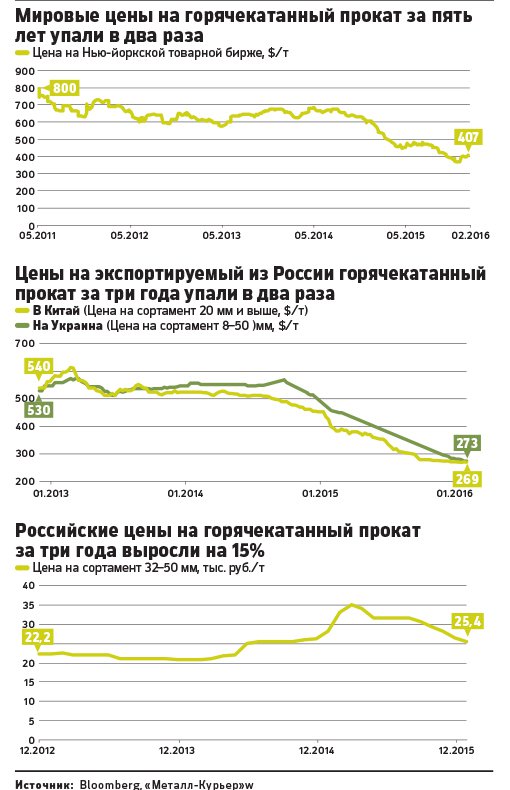 Automakers upcoming price increase reluctant to comment. Ford is a long-term contractual relationship with all suppliers, and the conditions for changing regulated prices under those contracts, said a company representative. KamAZ continues to work with vendors on current contracts, but details to disclose will not, said a spokesman for the company. Representatives of Renault, GAZ group and AVTOVAZ to comment on the price of the car.

The increase in selling prices often leads to conflicts between steelmakers and their customers that almost every major increase in prices complain to the government and the FAS not the inconsistency. The whole 2008-2009 financial crisis for them was in conflict because of the prices that I had to resolve who was then Deputy Prime Minister and Prime Minister Igor Sechin and Vladimir Putin. In 2008, one of these conflicts ended with Vladimir Putin at a meeting on metallurgy promised to “call the doctor” the owner of “Mechel” Igor Zyuzin, after which “Mechel” for the day lost a third of capitalization. A series of conflicts ended in 2010, when the mediation of the government of steelmakers and their customers has agreed to move to long-term contracts at a formula price tied to export markets.

In recent times, the conflict over steel prices broke out at the end of 2014, when metallurgists announced the impending price increase by 30-40%. This time in the government and the FAS complained to the manufacturers, railcar manufacturers and the oil companies, dissatisfied with the expensive tubes. After a short negotiation at the level of the Ministry of industry and trade and regular threats of introducing export duties on steel steelmakers agreed to adjust the prices at the lower end of the range (30%).

The dollar is more important than raw materials

Global steel prices have been declining for three years, and are now on the bottom. The export price of one ton of hot-rolled delivery in black sea ports in 2011 was $579, now $262. Russian export prices follow: currently the price of hot-rolled steel in the domestic market fell by about 30% and 20% — cold-rolled,” says the analyst of “VTB Capital” Boris Sinitsyn. He believes that the increase in prices in February and March, compensating for the devaluation of the ruble in the end of last year. “While capacity utilisation in the world is at the lowest since 2008 level,” — says the analyst. The price increase is unlikely to be long-term, it probably is a short term recovery in prices under the influence of the stocks, according to a review of BCS.

Car manufacturers respond to the price increase faster than all the consumers the rental. The analyst of “VTB Capital” Vladimir Bespalov says that in February, the increase in the cost of cars can reach 0.3–0.4% if prices rise. “If the rise in price of metal will lead to higher prices for components, then we can talk about cost growth on 0,7–1%”, — adds the analyst. The rental is a small part of the cost of the car, so the higher prices for rental almost will not affect the price, says a senior analyst at Sberbank CIB Igor Vasiliev. Due to the large number of imported components, the dynamics of the ruble affects prices much more, he says.