The index shows: Russians in 2015 increasingly began to notice that others appear stronger and aggression, bitterness, fear, resentment, despair and envy in relation to the surrounding world. Even more began to show depression, asthenia, fatigue, confusion and loneliness.

The level of depressive moods in the past year peaked for the time of the surveys. Last time a similar level of depression was demonstrated by respondents in 2009, when the country felt the effects of the economic crisis. Positive emotions among the Russians began to occur much less frequently: satisfaction, self-assertion, hope, confidence, and other enjoyable and creative feelings in a year of falling revenues due to the devaluation of the ruble and sanctions were the least experienced people in the country over the past 16 years.

Together with depression and bitterness the Russians in recent years began to think that they and their families have lost from the changes that have occurred in the country since 1992. The peak of this defeatist attitude was in December 2014, the first wave of a strong depreciation of the ruble. As negatively to the reforms of the beginning 90’s the Russians were set up in late 1999.

In the late 90-ies Russians, as was shown by the studies of the Levada center, most strongly were sure that they lost from perestroika, the collapse of the USSR and liberal reforms. The next period of defeatist feelings was recorded during the 2008 crisis.

Thus for the last 6 years has increased the number of Russians who do not believe in the thesis that Russia is a European country. According to the Levada center in October 2015, do not agree with this statement, 59% of Russians agree with him only 32%. In 2009, disagree with the fact that Russia is Europe, was less than those who was confident of return — 36% against 47% respectively. In 2008, despite the crisis, the proportions were also not in favor of those who do not associate themselves with Europe: 32% vs. 56%, respectively.

Against the background of increasing depressive and defeatist sentiment, coupled with the increased confidence of Russians that the country is not Europe, became more and more of those who sympathized with the Soviet political system. The share of such respondents has increased noticeably from July 2015 to January 2016. At about the same level of support for the Soviet state was recorded by sociologists in 2009.

Since the second half of 2015 significantly decreased Russian support for the Western model of democracy and the current political system. 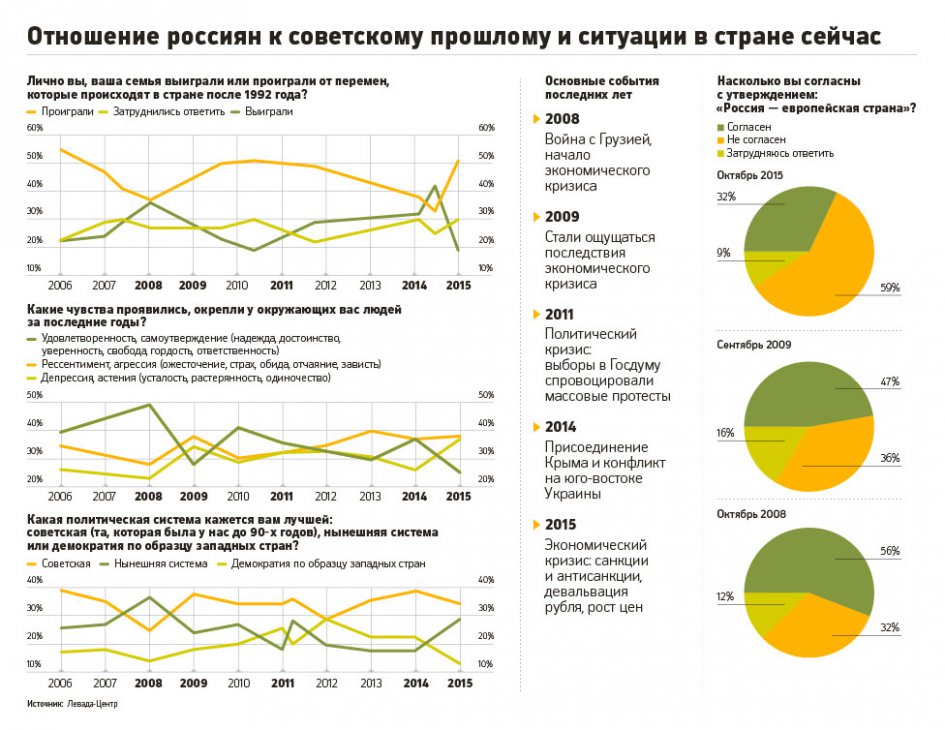 Aggressive anti-Ukrainian company on Russian television and state-run media ran over all the idea of reform and modernization, said Director of the Levada center, Lev Gudkov. By itself, this campaign, in his opinion, was aimed at discrediting the values of democracy and fair elections, hence, the attitude of Russians towards Europe in particular and the West in General, says Gudkov. Anti-Ukrainian campaign, the expert continues, accompanied by discrediting the opposition as foreign agents and native speakers of the foreign spirit.

As for manifesting himself in recent times artificial neotraditionalism, his nature is not in political preferences, and in the rise of the lower layers of mass consciousness, the most primitive and trivial ways of thinking, said the sociologist.

“Jealous and notorious ways of thinking prevail. Jealous in the first place for corrupt officials due to its proximity to the authorities were able to snatch a big chunk. Hence, there is a feeling of a loser. But a focus on the past is not the desire to go back there, but only the form of criticism of the authorities”, — said Gudkov.