MOSCOW, 5 February. /Corr. Viktor Litovkin/. Washington recognized Russia’s status as a nuclear superpower equal to the USA and signed in Prague Treaty on measures for the further reduction and limitation of strategic offensive arms (start-3). This opinion was expressed in an interview with academician of RAS, Director of the Center for international security IMEMO Alexei Arbatov in connection with the 5th anniversary of the entry into force of the Treaty.

“They admitted it. And parity has recognized, – said the academician. Is this a parity with all other asymmetries in the economy, the allies in conventional weapons – we do not just remain as a nuclear power, how nuclear superpower.”

Arbatov said that under the Contract, the American nuclear weapons for the first time is being cut more severely than the Russian. 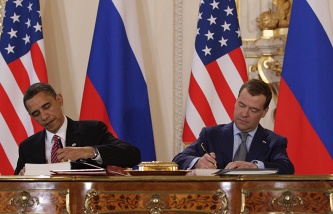 The contract on reduction of strategic offensive arms, start-3

“The uniqueness of this agreement is that for the first time in the history of strategic negotiations, which began in 1968, when they began to negotiate the salt-1 (then there was a whole series of different contracts, some in force, some not, but the talks went on constantly), Americans need to cut much more than Russia or the Soviet Union”, – said the academician.

“Every previous Treaty on strategic arms reductions expected more from the USSR than from the US, – noted Arbatov. For the first time this paradigm was changed, and Americans now need to cut more.”

The agreement between Russia and the US requires Russia unilateral reductions, which is important in the context of limited economic resources, according to the academician of the Russian Academy of Sciences.

“For us in conditions of limited resources – even as we have nuclear weapons to allocate more funds, still the U.S. and Russia are not comparable in economic opportunities – this contract means that we will not be reduced unilaterally, – the academician said. Americans will decline with us. And this is a unique feature of this agreement”.

According to Arbatov, the Russian start-3 Russia provides prestige, status, and military security.

An important feature of the start-3 Treaty is that it allows Russia unlike the U.S. is not cut, and to tighten the number of deployed ballistic missiles and heavy bombers before the limit is reached, he said.

“The advantage of the Treaty that preserved the conditions of the par – said the academician. – At a time when Americans could do nothing, and we still would decrease unilaterally (due to the aging Russian strategic systems – approx.TASS). For us it is very important that the par. This prestige is a status, it’s military security”.

On the start-3 Treaty

The start-3 Treaty was signed by the presidents of Russia and USA on 8 April 2010 in Prague and entered into force following ratification by the State Duma and the Congress on 5 February 2011. It provides for reductions of deployed strategic delivery vehicles (Intercontinental ballistic missiles and heavy bombers) for each side to 700 units and up to 1550 nuclear warheads on them. According to data from open sources, on September 1, 2015, Russia had deployed 526 1628 vehicles and warheads on them, and the USA respectively – and 762 1538.