NOVO-Ogaryovo, February 4. The President of Russia Vladimir Putin instructed the Governor of Nizhny Novgorod region Valery Shantsev to develop the field of medicine in the region. About it the speech came during a working meeting.

Putin will hold on Thursday a working meeting with several governors

“Medicine needs to be addressed, said the head of state, having listened to the report of the Governor. – Trend in this sense is good. It must be preserved”.

According to Shantsev, the Nizhny Novgorod region has completed the establishment of three-tier health system. “And in obstetrics, and cardio-vascular diseases, trauma, neurosurgery, – he said. – We have primary care, there are specialized inter-district centers and has a high-tech enterprise, is already 16”. Moreover, last year the region was first entered from 32 in Russia, the oblast perinatal center.

Overall, said the head of the region, by the end of 2015 the region has reached a particular milestone in social terms. “The average per capita income in 2005 is 25% behind the average level in Russia. Last year we exceeded the average level in Russia, however, by 0.4%, but still we have 30 thousand, he said. Made me particularly happy, if in 2005 the ratio of average per capita income to the subsistence minimum was two, meaning every employee could provide a living wage and one other person (no family here – not creative, i.e. social conditions), now we are approaching four to 3.85, that is, himself and three other people. But if two are working, it is no more of a living wage, it is possible to create a good family”. 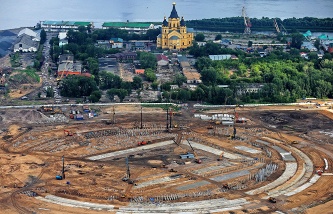 Demographic figures in the Nizhny Novgorod region the birth rate is increasing. “The birth rate last year, we were the first in the Volga Federal district, – said Shantsev. – The death rate is declining, decreasing the rate of natural attrition. He was of 10.7, when I started, now is 3.3”. The Governor also noted the growth of salaries of state employees and assured that all the roadmaps agreed with the ministries, the region is “slightly ahead of schedule”.

The Governor also commended the financial outcome of the region in 2015: the budget managed to exceed 600 million roubles. “The growth of about 8% compared to last year, he explained. – Good businesses, profit increased by 33 per cent in 2015.”

The level of registered unemployment in the Nizhniy Novgorod region amounted to 0,62% of the working population. “This is one of the lowest indicators in Russia”, – said the Governor. “In General, managed some indicators even improve relative to 2014, in social and economic terms, – said Shantsev. – If committed behind, not critical, associated with inflation, somewhere with some features of the market”.

Agriculture in the area

The performance of agriculture of the Nizhniy Novgorod region in 2015 increased by 2.2%, in the third region of increasing yields, reported Valery Shantsev.

“In agriculture too has kept pace. Last (2014) year increased by 4.4%, in this (2015) year – 2.2%, – said Shantsev. – Supplied with grain, and high-quality food grain, and seeds have delayed good and also cornmeal, potatoes provided vegetables in full. Milk – for the third year increases total milk yield, reached well on productivity – more than 5 thousand liters”.

The gross regional product in 2015 for the first time exceeded 1 trillion roubles. “The industry has worked decently in 2015, better than in 2014, – said Shantsev. – We on industry growth, in comparable prices, the volume index was 2.4%. But since we have one processing, mining, manufacturing, 2.8 per cent”.

In addition, labour productivity in the Nizhny Novgorod region grew by 8.1%. “Last year we implemented seven major investment projects, – said the head of the region. – Opened a second production of catalytic cracking (you first opened), Gas-fired two new conveyor line was launched: all-metal van “Gazelle Next”, before we all imports bought, now the whole line was filled, and organized the production of “Mercedes Sprinter”. According to Shantsev, the construction industry commissioned a new production with a production volume of 52 billion and 6.5 thousand jobs. “This year the planned 9 such projects, – said the Governor. – Probably the biggest by market capitalization – the Nizhny Novgorod machine building plant, at the end of February we commissioned”.