MOSCOW, 4 February. Minister of industry and trade of the Russian Federation Denis Manturov and the Prime Minister of Bavaria Horst Seehofer agreed to hold a German business mission in Russia in the current year. Said Manturov at the meeting on Thursday. 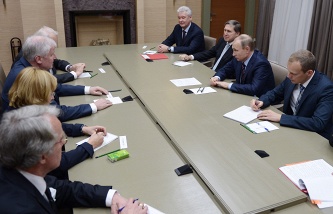 Putin noted the special nature of relations between Russia and Bavaria

“We agreed that this year the Prime Minister (Bavaria Horst Seehofer-approx.) implements the business mission of the German business in Russia in order to discuss specific issues of cooperation”, – said the Russian Minister, noting that the law on industrial policy, implemented last year, offers investors a range of opportunities. “The main thing is a comfortable investment climate and guarantee the implementation of their projects. All of these tools today is a Russian government – we believe that it will be interesting for German business”, – said Manturov.

Seehofer also met with the head of the Ministry of economic development Alexei Ulyukayev. The parties agreed during the meeting to establish a working group on development of cooperation in economy, education and science.

“The meeting (with the President of the Russian Federation Vladimir Putin the day before – approx. ed.) was very, very good. I want to repeat what we agreed. The Russian Federation and Bayern are creating a working group, which will give new impulses for cooperation in economy, science and education”, – said Seehofer. 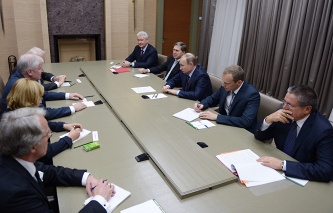 Sobyanin: Moscow has about 850 enterprises from Bavaria

He also expressed the hope that “the beginning of a new Chapter in the relations between Russia and Bavaria.” Seehofer also added that this year will come to Moscow again in the composition of a more extensive delegation, will discuss joint projects in the fields of science, technology and culture. “We hope that the visit will be agreed in different areas of cooperation that will be subsequently implemented,” he said. the visit is scheduled for autumn 2016.

In turn, the speaker noted the high productivity in economic relations with Bavaria. According to him, the decline in trade with Russian companies in Bavaria is twice lower than with companies from other German länder and the EU. “Today is not so business-friendly as we would like. Nevertheless our business finds the opportunities to make the right decisions and to develop cooperation”, – said Ulyukayev. He noted during the meeting that he is personally familiar with the products of Bavarian companies. “I know (Bavarian) products. I drive the BMW,” he said. In response, seehafer reported that lives in the city, where Audi was born, so the week goes to Audi, BMW week.

Summing up his visit to the Russian capital, the Prime Minister of Bavaria said that “the visit was timely, necessary and successful.”