MOSCOW, 4 February. In the Kremlin do not call the name of the deceased in Syria, the Russian military adviser, told reporters the President’s press Secretary Dmitry Peskov.

“The name is not (not-called), the Ministry of defence with their views on this, so we, naturally, can not name” – said the representative of the Kremlin. 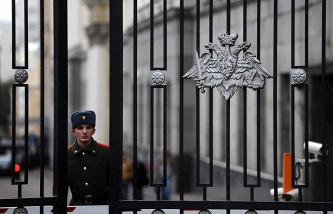 Killed in Syria a Russian military Advisor presents to generate

Answering the question about the reward to the deceased, Peskov said that “if the document is to be open, we will inform about it”.

Press Secretary of the head of state stressed that military adviser was not involved in the military operation, and trained the Syrian military to use the supplied RF equipment. “They (the Russian military advisers) do not participate in military operations, they advise,” said he, adding that on this occasion the defense Ministry of Russia has already given his explanation. “We are talking about consultants, this is due to training Syrian colleagues the equipment supplied to Syria under existing contracts,” – said Peskov.

To the question, where in the time of the death Russian, Peskov said that “learning takes place where deemed reasonable”.

The death of EA

On 1 February as a result of mortar attack by terrorists of the Islamic state (group banned in Russia) at the military garrison, which is stationed one of the compounds of the Syrian army, the officer received a mortal wound.

The Russian military launched operation against the militants “Islamic state” and “dzhebhat EN-Nusra” (organization banned in Russia) in Syria on 30 September, at the request of Syrian President Bashar al-Assad. In the air group originally was comprised of more than 50 aircraft, including the su-34 and su-24M, su-25, su-30CM, Mi-8 and Mi-24. Also in operation in early October, were engaged by ships of the Navy of the Russian Federation, which struck at targets of terrorists cruise missiles of sea basing “the Caliber of NC” from the Caspian sea. On November 17, defense Minister Sergei Shoigu said that the Long range aircraft VKS RF Tu-160, Tu-22M3 and Tu-95MS bombers bombed positions of the IG in Syria, made 34 launches of cruise missiles at militant targets in the provinces of Aleppo and Idlib. To participate in a ground operation, Russia does not intend.