After yesterday’s rebound of oil quotations on Thursday, then declined, then rose and was fixed by the evening above $35 per barrel. As of 19:00 MSK Brent futures rose 0.6% to $35,27. Analysts at Morgan Stanley lowered its forecast for average Brent crude oil price in 2016 39%, to $30 per barrel, and other experts warn that talking about long-term price growth is still early — there are no fundamental prerequisites for this.

Why oil has “bounced”?

Oil yesterday rose mainly due to an unexpected drop in the value of the American dollar (the price of oil and the dollar are characterized by inverse correlation). The dollar index (U.S. Dollar index), reflecting the value of the U.S. currency against a basket of other major currencies, fell by 1.7% (to the lowest level since early November) that became one of the biggest one-day fall of index in recent years. A sale of dollar on Forex statements provoked the influential President of the Federal reserve Bank of new York William Dudley, who said that financial conditions in the U.S. deteriorated significantly since December, when the fed raised its key rate for the first time since 2006. The market took comments by Dudley as a signal that the fed could postpone the next rate increase (prior to this, many market participants expected that the rate may be raised in March).

Another reason for the price rally probably was the closing of speculative short positions on oil. “Speculators out of the game to reduce the oil. They begin to close these positions, considering that already earned enough for this”, — quotes Reuters the Vice-President of research firm FactSet David Nadiga. According to the latest data of the Commission on futures trading USA and exchange ICE, a week to 26 January hedge funds and other speculators who trade options and futures on WTI and Brent, have reduced the short positions, i.e. bets on a fall in oil prices, by 8%, to 347 million barrels. Last year, short speculative positions are clearly correlated with the dynamics of oil prices: cycles of price reduction coincided with the build-up of short positions, and Vice versa. In 2016 a correlation, apparently, is maintained: short positions decrease two weeks in a row, and the oil price is growing accordingly. 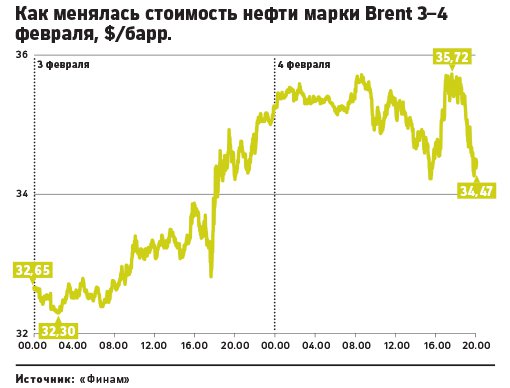 In addition, according to Reuters, this week, investors are suddenly eliminated bet $600 million on cheaper oil, made through the Fund VelocityShares 3x Inverse Crude Oil Exchange Traded Note (it allows you to earn on the dynamics of oil prices without futures trading).

Are there any fundamental prerequisites for price growth?

Over the past weeks on the market, nothing much has changed: oil producing countries have not reduced production volumes and global demand for oil is slowing — according to the forecast of the International energy Agency, following last year’s increase of 1.7 million barrels. a day world consumption in 2016 will increase only by 1.2 million barrels. a day. Moreover, as reported yesterday, the U.S. Department of energy, commercial oil reserves in the country last week rose by 7.8 million barrels. (stronger than the market had expected) and are at the peak since 1930. “Paradoxically, the fact that these stocks reached a new high of 503 million barrels. <…> did not affect the dynamics of oil prices,” said analysts at Sberbank CIB.

Morgan Stanley today lowered its forecast for average Brent crude oil price in 2016 to $30 per barrel (compared with $49 in the previous forecast). “Amid slowing demand, the market rebalancing will likely not happen before mid-2017 or even later,” wrote the Bank’s analysts. “We expect the current low prices will last until the second quarter of 2017. <…> Before that will be saved by increased volatility, and oil prices will be determined by the dollar index, news headlines and macroeconomic concerns”, they say.

The CBOE Crude Oil Volatility Index, which reflects the volatility of oil prices this week reached the highest level since March 2009, this year the index rose by 43%. On Thursday, Brent crude oil price fluctuated between $34,17 $35,79 per barrel, falling by 2.5% and up by 2.1% compared to the previous closing price.