MOSCOW, 4 February. Ankara has not provided a single fact of violation of its airspace by aircraft of the Russian Federation, ATT. This was stated by the official representative of the Russian foreign Ministry Maria Zakharova.

“No aircraft of the group HQs of the Russian Federation air border of Turkey has not violated,’ she said. Ankara so far has not provided any evidence to your accusations. On direct appeal to the Embassy to give such information there is no answer”. 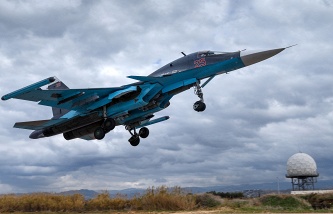 The Russian foreign Ministry: Moscow has not received materials about the violation of the border by a Russian plane

“All demands by the Russian side due to previous false accusations hung in the air, – noted the diplomat. – On all our requests to clarify what we are accused, no response received”.

According to her, similar requests in NATO also remain without reaction.

“In connection with the statement of the Turkish side that it is in NATO’s first recorded violation of air space by Russian aircraft supposedly, we also requested data objective control of the leadership of the Alliance, however, and there is no convincing evidence we have not provided,” – said the diplomat. “Of course it is very sad that this confrontational line pursued by Ankara, has the support of the U.S. and overall North Atlantic Alliance,” she said.

According to Zakharova, NATO, “the basis of the notorious bloc solidarity”, turn a blind eye to Turkey’s activities.

“We have repeatedly spoken about the problem of closing the Turkish-Syrian border, as an important factor stabilizing the situation and prevention, including support of terrorist organizations,” she said. “It seems that all of these unsubstantiated accusations, which we hear in the address of the Russian space forces, formulated in Ankara including in order to find an excuse, or provide cover for building up their own military activity in the area of the Turkish-Syrian border,” the diplomat said.

Ankara’s statements serious consequences for bilateral relations because of the alleged incident, the representative of the Russian foreign Ministry called blackmail.

January 30 , su-34 HQs of the Russian Federation on January 29, violated the borders of the Turkish airspace.

The defense Ministry denied the statements of Ankara on the alleged violation of Russian su-34 border Turkish airspace. Official representative of Russian defense Ministry major General Igor Konashenkov called these statements mere propaganda. “No violations of its airspace by aircraft of the Russian air group in the Syrian Arab Republic was not. The statements of the Turkish side about the alleged fact of a violation by the Russian su-34 air space – unfounded propaganda”, – said Konashenkov.