MOSCOW, 6 February. Congress of “United Russia” approved the procedure for conducting preliminary party vote for the selection of candidates for the Duma elections (primaries).

According to the regulation on the conduct of the primaries, which was endorsed by the delegates of the Congress, to participate in them will be members or supporters of the party who are not members of any other parties. The participants in the primaries must not have a criminal record, even the removed and extinguished, and any financial assets abroad or foreign financial instruments.

For holding the primaries will be created by the Federal and regional steering committees, where, in addition to party activists, including representatives of public associations and the media.

Nomination of participants in the primaries will be held from February 10 to April 15, the registration period will expire April 15. The nomination of candidates is organised solely by themselves. 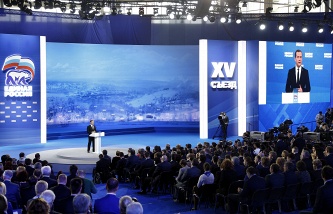 The right to submit to the Congress proposals for early voting is the Chairman of the party. “In this case, the voting delegates for the inclusion of such candidates on the ballot for a secret vote on the nomination of the Federal list of candidates (candidates in single-mandate constituencies) in the elections of state Duma deputies is for them the procedure of preliminary voting”, – stated in the text of the document. In other words, the Congress delegates can also be a kind of electoral College for inclusion of candidates in the electoral list of the party.

Early voting will be held across the country on may 22, it will be opened 20 thousand polling stations, their addresses will be promulgated until mid-March.

The primaries will be secret and rating. This means that each voter can vote for one candidate, but for multiple in each list. The party leadership hopes that this will help to identify opinion leaders.

Directly on the eve of the primaries, the candidates will meet with voters and other campaign events and participation in them is mandatory. Information about time and locations of the debates will be presented on the Internet.

The primaries are mandatory for the candidates in the electoral list of “United Russia”. As noted in the text of the provisions on the conduct of the primaries, they are meant to provide “citizens of the Russian Federation, public associations to participate in the political life of society”.

Speaking at the Congress, the party leader, Prime Minister Dmitry Medvedev, stressed that the elections “there were no contractual lists, pushing comfortable people will not, the game of “giveaway” we don’t need”. “The preliminary results of the vote will largely prejudge the outcome of the campaign, so it should be approached with maximum responsibility,” – said he.