MOSCOW, 5 February. Palestinian President Mahmoud Abbas clearly and firmly expressed their support of Russia’s actions in Syria. This was stated by the Chairman of the Federation Council Valentina Matvienko. 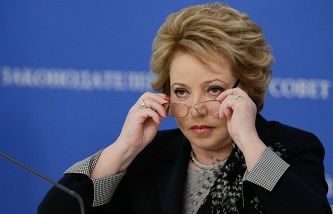 Matvienko: to solve the Palestinian-Israeli issue the necessary atmosphere of trust

According to her, the head of Palestine also noted: “the Fact that “Russia has returned to the middle East, creates a certain balance: this will not prevent the distortions”. Matvienko also added that Abbas “supports the need to strengthen the fight against the ISIL (“Islamic state of Iraq and the Levant”, the former name is forbidden in the Russian Federation terrorist group) and other international terrorist organizations.” “And in this sense, here we have no differences,” she said.

The majority of politicians and citizens of middle Eastern countries welcomed the political and humanitarian return of Russia in this region as in the Russian Federation a reliable and responsible partner, said Matvienko.

“The absolute majority of politicians and sane people to be grateful and appreciate the fact that Russia is returning not only to the Holy land and to regain its historic presence, but she politically returned to the middle East, it is extremely important”, – said the head of the Federation Council.

She also noted that in recent years Russia has done a lot for the resumption of its humanitarian presence in the Holy land. In particular, in Bethlehem (Palestine) opened Russian school, cultural center, which the Palestinians themselves have given the name of Russian President Vladimir Putin. Another complex was opened in Jericho. “We need to see the attitude of the inhabitants of Bethlehem and Palestine, the words of gratitude to Russia for what we reaffirm our friendship is not only words, but also such a bright, interesting projects,” said Matvienko.

The delegation of the upper house of the Russian Parliament headed by Valentina Matvienko, 2-4 February, paid an official visit to Israel and a visit to Palestine. The senators held talks with the presidents of both countries Reuven Rivlin and Mahmoud Abbas, as well as Chairman of the Israeli Knesset Yuli Edelstein. Between SF and the Knesset signed a cooperation agreement. Within the humanitarian program, members of the Federation Council visited a Russian school and cultural centre in Palestine, the Russian ecclesiastical mission and the memorial “Yad Vashem” in Jerusalem and took part in the ceremony of laying wreaths to the monument to red Army soldiers in the Israeli city of Netanya.