Speaking at the Congress of “United Russia”, Chairman of which he is the head of the Cabinet reminded that many around the country and sees a clear picture of the differences between the regions of the Russian Federation. “There are those who have learned to live without the income from the export of oil, gas and other raw materials. They repaired the old factories and built new ones. As a result – has received thousands of new jobs and interest from investors,” Medvedev said. Along with this, he continued, there are regions which have oil and gas, timber and gold. “And no good roads. And for water in the 21st century, go to the column, when it’s minus 30!”, – described the situation the head of “United Russia”, stressing that this is not normal. 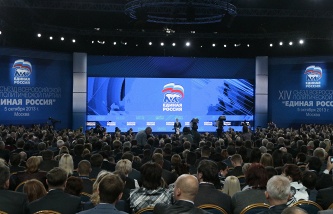 “I am confident that neither the Governor nor the mayor, no other leader in the water column itself is not gaining,” – said Medvedev.

According to him, “in such situations, the party (United Russia) is obliged to react”. In particular, said Medvedev, it is necessary to enforce their decisions, including in the framework of the new plan of action in the economy.

In this regard, he recalled that the document sets forth, among other things, structural measures over the medium term, which should help to reach sustainable growth. “What is growth? This is a new modern enterprise, breakthrough projects and technological solutions. Ultimately this increase in people’s incomes. The implementation of this plan depends largely on our joint work, from effective work on the ground in the regions and municipalities”, – said the head of government.

According to him, in the action plan in the economy of pledged assistance to the regions. “Russia is not only Moscow, it is not only the capital regions. Russia begins in the villages and small towns, the porches and in the yards. Where people need to see concrete solutions. The people themselves are ready to offer many ideas. While regional and municipal authorities should be able to hear these initiatives, to be able to communicate, be able to explain our position, to be in direct contact with people on the street, in the yard, on a personal reception. Not to hide and to communicate. This should be the strategy of our party”, – concluded the Prime Minister.