MOSCOW, 8 February. The fate of the export duty on wheat will be solved “from hour to hour.” This was stated to journalists by the first Deputy head of the Ministry of agriculture Evgeny Gromyko in the sidelines of the exhibition “Prodexpo 2016”. 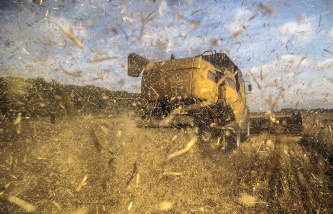 WSJ: Russia may become the world’s largest exporter of wheat

“The decision on duty waiting for us literally from hour to hour, will be accepted. But, in any case, this solution will suit both producers and grain exporters. No problems of Russian exporters and grain producers will not be, today, the normal price was formed. We are not going to interpose no obstacle to the export,” he said.

January 29 held a meeting in the government with the participation of Deputy Prime Minister Arkady Dvorkovich, representatives of the Ministry of agriculture, market participants and experts, which discussed issues of export duties for wheat. However, no decision was taken.

New, introduced for a year, the duty on wheat exports from Russia came into effect on 1 July 2015 the Reason for this was the growing activity of exporters, which increased the sale of grain to foreign markets for the currency, and sought thus to benefit from the sharp fall of the ruble. Rate of duty denominated in roubles, and the size was 50% of the customs value minus 5.5 thousand rubles per 1 ton, but not less than 50 rubles per 1 ton From 1 October, the Russian government changed the export duty on wheat. The deductible was increased from 5.5 thousand to 6,5 thousand roubles for ton, and the minimum amount of duty reduced from 50 to 10 rubles. per ton

Representatives of the grain industry has repeatedly asked the government to cancel the duty. In particular, this was the position taken by the Russian grain Union (RGU). However, the industry has no single consolidated position on this occasion, was the head of the Union Arcady Zlochevsky.