MOSCOW, 8 February. The guilt of Russia in the suspension of Syrian peace talks no, said the press Secretary of the President Dmitry Peskov.

“You can hardly blame the Russian Federation that it is some sort of ephemeral blame for the suspension of the negotiations”, – said the representative of the Kremlin. 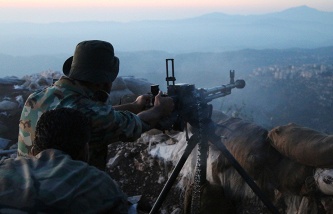 The Governor of Latakia: the people holding the land in the province and will never give it to terrorists

Media: Syrian troops surround the town of al-Bab is a major foothold of the militants

Putin will hold a “very detailed” talks with king of Bahrain

He recalled that “the Russian Federation has supported the offensive operations of the Syrian army fighting against terrorist groups”. “Terrorist groups do not accept and should not accept participation in these negotiations (Syrian)”, – said Peskov. He noted that “the question of whether to continue the fight against these groups (terrorist) no one disputes”.

The inter-Syrian negotiations on the conflict settlement in the country were due to start in Geneva in early February. However, a few days later they were moved to the end of the month. UN special envoy on Syria Staffan de Mistura expressed hope that contacts between the parties in the Syrian conflict resume in Geneva on 25 February. However, some Western countries stated that the onset of the Syrian army with the support of the Russian military undermines the hope of achieving peace.

Previously Peskov, commenting on the opinion of some Western politicians who claim that providing military assistance to the forces of Bashar al-Assad, Moscow makes it impossible for a peaceful political resolution, declared that in Moscow this opinion is considered incorrect and are not able to agree with him. “Russia is supporting the legitimate leadership of the Syrian Arab Republic in combating terrorism, with terrorist groups and simultaneously exerts effort on political and diplomatic track, – said Peskov then. – We are aware that this negotiating process will not be easy, it will not be fleeting. But we hope that it will continue.”