MOSCOW, 8 February. Moscow was pleased, as was the “year of Russia” in the BRICS. About it in interview was declared by the Deputy Minister of foreign Affairs of Russia Sergey Ryabkov.

Deputy foreign Minister of the Russian Federation reported that they are now prepared and will soon be released the final report of the Russian presidency. The collection includes everything that was taken during Russian chairmanship in the Association.

“Overall satisfied with how was the “year of Russia” in the BRICS, said the senior diplomat. – Not only thanks to the agreements reached and practical results, but primarily because it is the Union once again proved its viability and relevance”.

He also stressed that BRICS is nothing that could be put as “anti-Western” orientation of this Association. Generally “anti” in the BRICS is not present, it is always ”about”, not “contra”, this is not a geopolitical counterweight to anything or anyone. This approach is supported by all participants of the Association”.
“Each cycle of BRICS presidency, enriches, strengthens the Foundation and the building is built on, he added. – I am sure that it will. Unity is a multiplier of national interests when the country is well aware of what they want to achieve from their cooperation. Collective work increases the chances of implementation of ideas”.

Criticism of the BRICS – the significance of the Association

Critical comments about the BRICS – the best sign of the importance of associations for international relations, said Sergei Ryabkov. 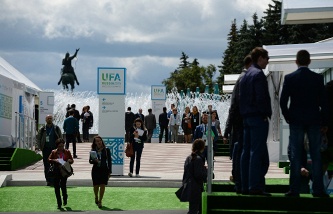 The expansion of the SCO, the BRICS ‘ financial institutions and other results of the summits in Ufa

“Now, especially in the West, a lot of speculation that the economic dynamics of some of the members of the BRICS exhausted that the Association “not what it used to,” said the senior diplomat. “I want to say that my critical comments are the best indication of the importance of the BRICS, the importance of this structure for international relations. If this were not so, the BRICS would have ignored, and wouldn’t try to present its state in a critical manner,” he added.

According to Ryabkov, is here again manifested certain “complex” of Russian opponents – “they can not perceive something that does not fit into their own ideas or developed their patterns of international relations”. “If something does not have the stigma of “made in the West” – this obviously causes suspicion and rejection, he continued. – Separatenot mentality of these critics so disproportionate that nothing but a smile, can not cause. People who are ready to perceive today’s multipolar world, needs to calm attitude to phenomena such as the BRICS”.