Syrian army reports about the success of the military operation in Aleppo province in the North of the country. With the support of Russian aviation troops of Bashar al-Assad was able to capture the city Baden and Retian, reported on Monday, the Lebanese channel “al-Mayadin”. As a result, the Assad army has closed an important highway leading from Aleppo to Azaz, a town on the border with Turkey. On this road the troops holding the city of the rebel “free Syrian army” (FSA, the main opposition force) received weapons and ammunition from the Northern regions.

Aleppo — the second largest city of Syria after Damascus. Before the civil war had a population of 2.4 million people. “Whoever controls Aleppo controls the outputs to the Turkish border,” explains researcher of the Institute of Oriental studies of the Russian Academy of Sciences Grigory Melamedov. He notes that the yield on Raqqa — the capital of ISIS, is also possible only when control of Aleppo.

“There are airfields and military bases”, — denotes the importance of the city from a military point of view of a military expert, Viktor Murakhovsky. In addition, he noted that the city easier to defend from attack than a wilderness.

It uses SSA, which holds more than a year Eastern areas of Aleppo. For the rebels are up to 10 thousand people, including 2.5 thousand militants of the “Front EN-Nusra” (branch of al-Qaeda in Syria) and the other group of Islamists, “Ahrar al-sham”. At the disposal of defending a large number of weapons, including anti-tank missiles. None of these groups stands on the side of the “Islamic state”.

The city come the Pro-government forces including the Republican guard (about 20 thousand soldiers). They help the Alawite troops — about 1,5 thousand people and the Iranian militia, the exact number is unknown. The operation also involved from 2 to 4 thousand soldiers of the Lebanese Hezbollah.

According to the opposition, in addition to manpower, government forces use the technique with approximately 100 tanks and 400 APCS, included in a fourth Panzer division, which is being personally overseen by the President’s brother Maher al-Assad. 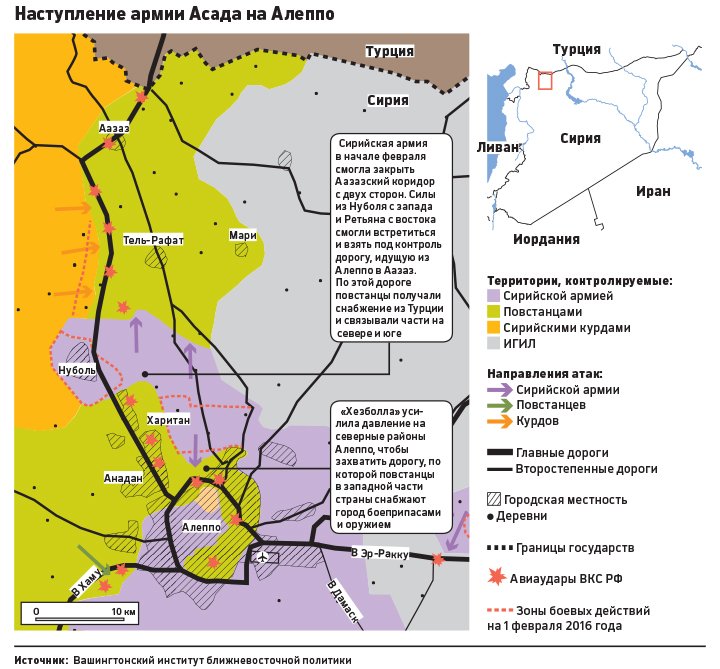 From January to February, government forces were able to close a narrow corridor between two controlled territories: the surroundings of the city Nobol Bacskai and villages in the East. This step cut off Aleppo from Turkey bordering Northern territories controlled by the SAA. From there, the city defenders received reinforcements and ammunition.

Republican troops continue a rapid movement to the North to Azaz. During the attack on Monday, the Syrian army approached the Turkish border at a distance of 25 km the Purpose of the government army is the city tal-Rifaat, who took the PAS.

Hezbollah troops began to occupy the opposition-held areas of Aleppo.

Since Aleppo is a largely urban area, the onset is extremely slow, Murakhovsky says. “In the city fight for one street can go for weeks”, — said the expert. According to estimates of the Washington Institute for near East policy, Hezbollah in the next few weeks will be able to close the road connecting Aleppo with the rest of the territories of the Free Syrian army in the West. After this Assad will take a wait, surrounding the city, experts say. “It is best to surround the city and gradually compress the ring” — I agree Murakhovsky.

“The siege of Aleppo can go a few years,” predicts independent expert Pavel Felgengauer. According to him, the siege may be lifted after the intervention of foreign forces, for example, the introduction of a humanitarian corridor.

In response to the movement of troops Assad to the Northern border, the Turkish side announced that he was going to build a new city for refugees on Syrian territory. Thus, according to the Deputy Director of the Institute for political and military analysis Alexander Khramchikhin, Turkey tries to promote the project buffer zone on Syrian territory. President Recep Tayyip Erdogan, speaking to reporters on 7 February, noted that the buffer zone may be greater than previously agreed 98 km away. “I told Obama that we can increase this area. With the help of donor countries we can build inside Syria new city”, — said the President of the Turkish press.

“The Turks put a lot of things to defeat Assad, and now they’re on the border you may receive Kurdish state”, — commented the expert. According to the expert, the establishment of an independent Kurdistan, near the southern border of Turkey is not included in the plans of Erdogan.

Against this background, in his opinion, very likely a ground operation Turkey to Syria. “Possible military clash between Russia and Turkey in Syria”, — the expert predicts. Disagree Melamedov from the Institute of Oriental studies of the Russian Academy of Sciences. He is sure that Turkey will not send troops to Syria, and will focus on diplomatic techniques. “Erdogan can leave the Syrian camps on the border and use this argument in negotiations,” says Melamed.

The third option offers the analysts of the Washington Institute for near East policy. In response to the successes of Assad, Turkey and Saudi Arabia can provide the rebels anti-aircraft missiles. “Another option would be a new front in Northern Libya. There are thousands of desperate refugees and local Salafi groups may oppose Assad,” — says the experts.