MOSCOW, February 9. Many foreign partners have come to better understand the origins of the crisis in Ukraine, said the Russia’s permanent representative to the UN Vitaly Churkin in an interview to “Rossiyskaya Gazeta”. 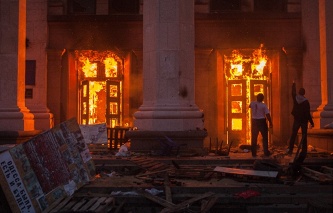 In France, despite the protests of Kiev, showed the film, objectively telling about the Maidan

“I think that many of our foreign partners have a better understanding of the origins of the crisis in Ukraine, peculiarities of the political situation in that country, including the influence on him of neo-Nazi and radical groups” – said Russia’s permanent representative to the United Nations.

Meanwhile, Churkin said, that caught the attention of his colleagues in the UN to a recent French TV film “Ukraine: mask of the revolution”.

Vitaly Churkin said that he established working contact with the Ukrainian Ambassador to the UN Volodymyr Yelchenko, who previously worked as Ambassador of Ukraine in Moscow. “This is necessary because in January of this year, Ukraine became a non-permanent member of the UN Security Council for a two year period. It is too early to judge how the relationship will be formed of our delegations”, – he explained.

Churkin expressed regret at the choice of Ukraine: “Either they’ll conduct business across the spectrum of agenda th, proceeding from its national interests and views, or will assume the role of “sang” by our Western contractors wherever possible, contrary to Russia’s position. So far, unfortunately, it seems that they prefer the second way.”

According to the envoy, “it is not good neither the Security Council nor the international image of Ukraine”.