On the night of Tuesday, February 9 at once at the several stations of the Moscow metro began the demolition of commercial premises, which the city authorities have recognized the squatter. The decision to demolish the 104 facilities in December took the government of Moscow, it was stated in the decision “About measures on provision of demolition of unauthorized construction in some areas of the city of Moscow”. In the list of objects subject to demolition were small stalls and major shopping malls: shopping center “Pyramid” near metro station “Pushkin”, shopping center “Albatross” at the station “Schelkovskaya”, and a shopping arcade at metro stations “Chistye Prudy”, “Kropotkin”, “Arbat” and “Ulitsa 1905 goda”. 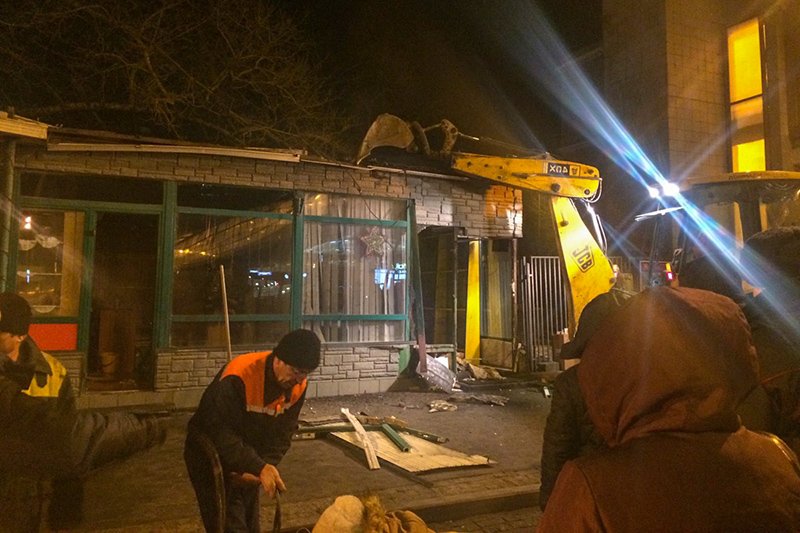 The demolition of the retail pavilions on Leningrad prospect Photo: Anna Levinsky/

At the same time, the demolition of some of the pavilions began on Leningrad prospect. As the correspondent , the door to the pavilion where they sell flowers, vegetables and fruits on Leningradsky Prospekt, 54, started to cut builders. In the room there are people.

According to her, the notice of demolition sent to the CEO 30 days ago, hall worked for about 10 people.

Co-owner of the pavilion in Leningrad, 54 Irina Dotsenko told that she has property on the premises. “We have all the documents that the premises in the property (certificate of 2000), to deprive it only according to the court, it was not. Just tomorrow will come home and say, take your bricks — land necessary to the city, get out with your certificate of ownership. We have a court decision stating that we have issued land relations. This just was not fulfilled. The police officers just shrugged their shoulders and left. It’s just redistribution of property. Now we demolish the unauthorized construction. Squatter with a certificate of ownership,” said Dotsenko.

Police and workers also came to the pavilion “the Euronetwork” at metro station “Sokol” at the intersection of Leningradsky Avenue and 1st Aeroportovskaya street. Equipment in the store.

According to gazetasi also started the demolition of the retail pavilions near the metro “Marxist” and “Mayakovskaya”. According to “Russian news service”, the police drove the protesters tenants of the shopping center “Albatross” at the station “Schelkovskaya”. To the shopping center came the head of the Council of the North Izmailovo Dmitry Datsenko. He walked up to the sellers outlets and demanded to vacate the building. Several dozen employees of the stores decided to stay at the building in protest. Commercial Director of “Albatross” Alexey Voronin has told RSN that in January the arbitration court has confirmed the legal status of the building.

As previously explained to “Vedomosti” Deputy head of state Inspectorate for real estate Timur Zeldich, February 8 is the deadline for the voluntary dismantling unauthorized buildings, demolition works were scheduled to commence from 00.00 hours on 9 February — on a schedule approved by the prefectures. “Every hour of the existence of such an object threatens the life and health of not only those who work in it, but also all nearby people, and, knowing this, the Prefecture should seek as soon as possible to rid them from the city”, — said the publication of Zeldich.