SOCHI, February 8. Russia and Bahrain are for the peaceful resolution of all conflicts in the middle East, defend the right of people to determine their own destiny. This was stated by Russian foreign Minister Sergei Lavrov following the meeting of Russian President Vladimir Putin met with king of Bahrain Hamad bin ISA al-Khalifa.

“The heads of state discussed cooperation on international Affairs, on regional issues, discussed the situation in the middle East and North Africa”, – said the Minister. 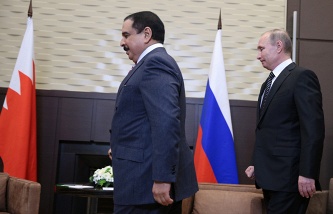 Lavrov stressed that the common position of the two countries “is that, first of all, you need to define the priorities for the world community, and this is the irreconcilable fight against terrorism, the peaceful resolution of conflict situations, avoidance of actions that lead to the collapse of States”. “From this point of view the President and His Majesty exchanged points of view on what is happening in Syria,” – said the head of the Russian foreign Ministry.

According to Lavrov, both sides “reaffirmed our mutual support for the actions of the international community, on the basis of complete and scrupulous compliance with the resolutions of the UN Security Council, 2254, including in the context of the need to maintain an inclusive inter-Syrian dialogue to have Syrians themselves decide the destiny of their country”.

“Such support we will provide through the International support group Syria that its next meeting will be held on February 11 in Munich”, stated the Minister.

Lavrov said that Russia and Bahrain “want to see Syria a stable country, which consolidated the foundations of the secular state, a country that provides its territorial integrity, the country in which the rights of all without exception of citizens.”

“These are the principles on which we see the settlement of other conflicts in the region and the Libyan, and Yemeni, be it the situation around Iraq, Afghanistan. We pay special attention to the need to intensify the efforts of the international community to promote Palestinian-Israeli settlement on an equitable international basis,” – said the head of the Russian dipvedomstva.

“We believe that the people should choose their own destiny, and the support and assistance from the international community should be calibrated and adequate and should take full account of the traditions and history of this rich region,” the Minister added.

On cooperation in all fields

“The meeting was held in a very friendly, warm and confidential atmosphere, – he informed. – The leaders of Russia and Bahrain aims to develop cooperation in all fields. The last years we have intensively developed political dialogue, there is keen interest to establish inter-parliamentary contacts, in recent years significantly increased attention to trade and economic cooperation”. 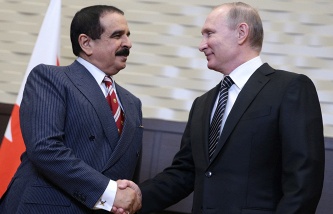 Putin: Russia and Bahrain is creating new mechanisms for cooperation

“The development of trade and economic relations in such spheres as energy, infrastructure, will undoubtedly contribute to the establishment of the intergovernmental Commission on trade – economic cooperation, – said the Minister. – The agreement in principle reached, now comes the negotiation of the relevant agreements”.

Thus, according to Lavrov, the business community is not waiting for a formal decision. “The most intensively developing cooperation in the investment sphere, – he continued. – The sovereign Fund of Bahrain has invested in the Russian direct investment Fund (RDIF) 250 million US dollars”.

“Furthermore, have either been started, or planned to be implemented up to 20 projects worth several billion rubles, – said the head of the Russian foreign Ministry. – There is keen interest on both sides to cooperate in the gas sphere, “Gazprom” with Bahraini partners are substantive conversations about specific projects”.

Lavrov reminded that operates the Russian-Bahraini business Council, regular meetings of entrepreneurs in the Russian and Bahraini Bahrain in Russia. “This year a new dimension has acquired military-technical cooperation, he added. – Established an intergovernmental Commission, in which there are a number of specific developments of mutual interest”.

“Contacts in the military, we hope, also start up and be fruitful, – said the Minister. – Members of the armed forces of Bahrain were invited to our games – “aviadarts and tank biathlon”.

In addition, Lavrov said that Russia and Bahrain will liaise in connection with the upcoming presidential election FIFA. “The king of Bahrain has actively supported the holding of the 2018 world Cup football in Russia”, – said the Minister.

The Reaction Of Bahrain

Bahrain highly values Russia’s role in efforts to bring Syria out of the crisis. This was stated by Minister of foreign Affairs of Bahrain, Khalid bin Ahmed al Khalifa on the outcome of the negotiations.

“We believe that all large and powerful countries need to cooperate with Russia to return to Syria stability and peace,” he said. 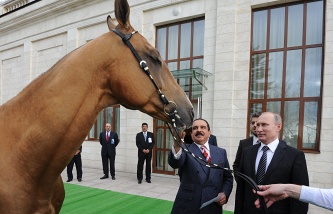 Putin gave the king of Bahrain horse, and in return received a sword

“We also hope to cooperate with Russia in the format of strategic dialogue Russia – cooperation Council for the Arab States of the Persian Gulf and welcomed the updated Russian concept of security in the Gulf area, – continued the Minister. – Now we attentively study the updated concept”.

The foreign Minister of Bahrain drew attention to the fact that the positions of the two countries on major issues issues of the Middle East and North Africa are the same. “First of all, the need to combat terrorism, the necessity of finding a peaceful solution of the existing contradictions, the inadmissibility of the disintegration of States and overthrow legitimate governments,” he said.

According to him, many countries in the region affected by conflicts, “faced with the manifestations of interreligious and interfaith struggle”. “This has led to the emergence of a large number of refugees and displaced persons, he added. – There are hundreds of thousands, so it is a global problem that weakens the state.”

Touching upon the sphere of bilateral relations, the head of the Bahraini foreign Ministry stressed that “since the establishment of diplomatic relations both countries have come a huge way on their strengthening”. Among the existing mechanism of bilateral cooperation, he identified first and foremost intergovernmental Commission on trade and economic cooperation, the Commission on military – technical cooperation, which represents an opportunity for Bahrain to purchase Russian weapons, as well as mechanisms of cooperation in the field of economy, investment and bilateral Business Council.

The Minister also informed that the king of Bahrain wished Russia every success in the world championship on football in 2018.