MOSCOW, February 9. Prime Minister Dmitry Medvedev noted the stable development of aviation industry in Russia, despite the difficulties in the economy. According to the official website of the Cabinet of Ministers, the Prime Minister wrote about it in the greeting to guests and participants of the exhibition of the National infrastructure of civil aviation NAIS, which opened in Moscow. 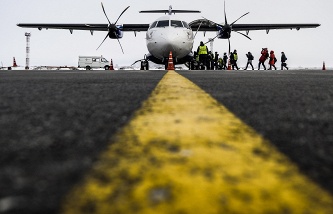 “Despite the difficult economic situation, the aviation industry continues to work steadily and, in General, shows its strength”, – said Medvedev, noting that “the reconstruction of airports, updated the fleet is being modernized navigation equipment”. “Among the most vivid examples is the reconstruction of air transport infrastructure in Crimea; largely thanks to you, Simferopol became one of the most attractive and popular destinations, taking in 2015, five million passengers,” he listed.

Medvedev said that the exhibition timed to the Day of civil aviation in this regard and congratulated industry workers on their professional holiday. “I am confident that you will continue to work effectively, will do everything to ensure that our civil aviation has always been “at altitude”, – said the Prime Minister.

The NAIS held for the third time and is a key event in the industry of civil aviation in Russia and CIS. “Your show… has gained a well-deserved reputation among Russian and foreign experts, has established itself as the main industry event of the year”, – said the Prime Minister.