MOSCOW, February 9. The governmental Commission on coordination of Open government approved the list of directions of an expenditure of budgetary appropriations for the procurement of works and services in information illumination of activity of bodies of state power of subjects of the Russian Federation and the requirements for placing on the Internet a statement of such costs and the support costs of the media. On Tuesday the press-service of Open government.

In October last year, Prime Minister Dmitry Medvedev instructed to develop these documents and advise the regional ministries and agencies to comply with them. 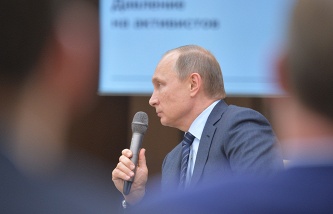 “In the list of directions of an expenditure of budgetary allocations include provision of subsidies to legal entities, individual entrepreneurs and individuals – producers of goods and services in the field of media, as well as subsidies for financial support for the implementation of the state task of the state budget and Autonomous institutions of subjects of the Russian Federation implementing media coverage of the activities of government agencies of constituent entities of the Russian Federation. In addition, the list includes the procurement at the field placement and distribution of materials about the activities of state bodies of the subjects on coverage of activity of state bodies in the media, printed publications and the Internet, as well as in the field of audiovisual productions on the activities of the regional authorities”, – stated in the message of Open government.

Completed at the end of the November meeting about the debt burden on regional budgets, the head of the government recommended that the highest officials of constituent entities of the Russian Federation to reduce frivolous spending of regional budgets on media coverage of activities of bodies of state power of the subjects. Reports according to approved requirements should be posted on the official website of the Department semiannually, within 15 working days after the reporting period: 1 July and 31 December. The statements for 2015 must be published before 31 March of the current year.

The importance of improving the transparency of the spending departments on the coverage of their work in the media has previously stressed the President of Russia Vladimir Putin. “The authorities and management should not engage in self-PR, they should inform the public about what is being done, it’s quite obvious. And is a service that is purchased by the authority. Money, if spent on goods and services, they must be spent in a transparent manner. The most transparent way is the auction… let us think in this direction”, – said the head of state.