MOSCOW, February 9. Ex-Moscow mayor Yuri Luzhkov believes that the shopping centers and pavilions, which the current government of the city is called self-construction, appeared in 1990-ies in accordance with existing regulations. He said this in an interview published on the website of “Komsomolskaya Pravda”, which was published Sunday on the newspaper’s website. 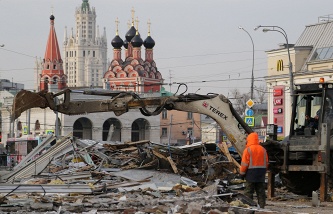 Answering a correspondent’s question about the legality of the emergence of trade pavilions in the years when he was mayor, Luzhkov replied: “we Have developed and adopted regulations that ensured freedom of movement of people coming and going from the subway. And this requirement on the metro, but at the same time we took into consideration and what you need to help small businesses. Many people are turning to shop, especially the little things, to the tents. It’s everywhere in the world. Why this should not happen in Moscow?”

Luzhkov added that in the period when he was the mayor of the Russian capital, the authorities have struggled with illegal building, but were guided by other principles than the current government. “We demolished the buildings, which by definition of the court were illegal. Here is crucial. Buildings that must be torn down, needs to communicate on the court,” – said Luzhkov.

As previously reported, on Tuesday night, the city authorities began demolishing 97 shopping pavilions, which they call a squatter. Just to the demolition of the object is determined 104. Their dismantling will continue until the end of February.