MOSCOW, February 10. The Chairman of the party “Fair Russia” Sergey Mironov has declared that on forthcoming elections in the state Duma he expects to receive support from the Russian popular front (onf). About Mironov said in an interview to the newspaper “Izvestia”.

“I believe that this organization is focused only on the President, it’s his project. And if there is such a platform, it would be foolish for us not use it. Moreover, I have no doubt that some of my friends who go on one-mandatory districts, will be supported by onf and onf from their districts, nobody will put forward”, – quote “Izvestia” the words of Mironov. 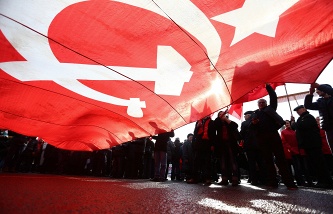 The Deputy Chairman of the CEC: verify information on accounts and securities of the candidates will become bigger

Mironov reminded that his party expects to hold elections at least in second position.

“If we talk about what results we expect then publicly to the Central Council, I said that our party in the elections of the 7th convocation should take no second places. This is a very ambitious goal. But we believe that we can overtake at least the Communist party, and as a maximum – to deprive “United Russia”, – said Mironov.

Speaking of party lists, Mironov stressed that in the beginning of the list “Fair Russia” will be his name.

“But I’m the party announced that in the beginning of the list will have only one my name. I am the leader of the party, I’m bringing the whole team into battle, but when we get our interest, if they are good, I’ll take only one mandate, and nine others will go to the regional group. I am showing that we do not need some public people who are not in the party. We have enough powerful their candidates, ” – said Mironov.

As noted by “news” Mironov also said that the major demands of his party in the upcoming elections will be the cancellation charges for capital repairs, vehicle tax, the abolition of the existing tax system from the point of view of income redistribution in favour of working people.