MOSCOW, February 10. The Chairman of the state Duma Sergey Naryshkin compared the Council of Europe with a kind of “antechamber of the European Union”.

“Instead of a platform for pan-European dialogue and finding joint solutions to common problems facing the European continent, it becomes more and more a hallway of the European Union”, – said the speaker at the meeting of the bleachers on the theme “20 years in the Council of Europe”.

In this regard, Naryshkin cited the words of the first Russian President Boris Yeltsin, who, speaking in Strasbourg in 1997, noted that the Council of Europe “faster than other approaches of getting rid of the “cold war”. “But today hardly anyone will be able to repeat this assessment – of course, who knows the true state of Affairs”, – stated the head of the lower house of the Russian Parliament.

“But the disadvantages, which is also mentioned in the speech of the Russian President, not only preserved, but also deepened,” he said.

Naryshkin hopes that the new head of the parliamentary Assembly of the Council of Europe Pedro Agramunt will try to change the situation in PACE, including the position in respect of the delegation of the Russian Federation. 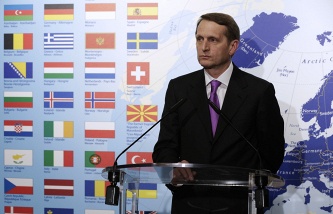 “We hope that the new PACE President, elected recently at the January session, will try to change the situation and to clean up those blockages that were created by the fault of the previous leadership,” said Naryshkin, opening the meeting of the bleachers.

The speaker of the house, Recalling that in the last two years the delegation of the Russian Federation practically does not participate in the parliamentary Assembly, indicated that “in the case of Russia illegal and immoral actions were multiplied by Russophobia and stereotypes of the cold war half a century ago”.

“In my estimation, of all international institutions with a parliamentary dimension, the parliamentary format, the most problematic and biased situation in the parliamentary Assembly of the Council of Europe… Part of deputies does not want to hear a different opinion, and many are simply afraid to Express their own opinions,” said Naryshkin.

18 January Sergey Naryshkin has informed on refusal of the Russian delegation to submit an application to participate in PACE session in January, which will be held from 25 to 29 January. In her address the Chairman of the state Duma and head of the Federation Council Valentina Matvienko at the head of the PACE, in particular, stated that the Parliament of the Russian Federation “at the moment it is not possible to refer to PACE for approval of the credentials of the Russian delegation to the January session of the Assembly in 2016”. The document noted that the Federal Assembly of the Russian Federation is ready to resume work in PACE in case of observance of the rights of national delegations.

In response to a letter from Brasseur made a statement, which noted that “under article 26 of the Statute of the Council of Europe and article 6 of the Regulations of the Assembly, the delegation of the Russian Federation will not be able to participate in the work of the Assembly throughout the 2016 or at least until the next parliamentary elections in Russia (after which will be formed the new composition of the delegation – ed.)”.