MOSCOW, February 9. Sales of TVs in the Russian Federation in December 2015 compared to November of 2015 grew by 66,1%, mobile phones – by 61.7%. This is evidenced by data from the main report of Rosstat. 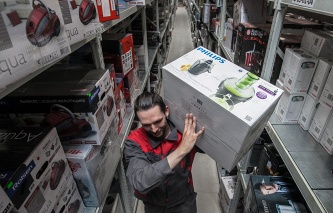 Retailers prepare for higher prices on gadgets amid weakening ruble

Computers in complete set was sold to a 49.4% increase.

Sales of refrigerators and freezers has increased in December by 17.8%, washing machines – by 11.6%.

A year ago, Rosstat reported higher December sales of TVs by 71%, mobile phones – 50.7%, computers – 55.4%, refrigerators by 78%, washing machines by 65.9%. Then a survey of major retailers that sell electronics (M. Video”, “Eldorado”, Media Markt, “Svyaznoy”, “Hardware”) conducted, showed that the prospect of rising prices increased pre-Christmas demand for home appliances and electronics in Russia by 50%.