LONDON, 10 February. /Corr. Ilya Dmitriev/. Russian-British relations are in a “frozen” state, and the responsibility for this lies with London. This opinion was expressed in an interview with the Russian Ambassador to the UK Alexander Yakovenko, calling this attitude “the new reality”. “Naturally, we will make every effort to align political relations with great Britain, but it is not our fault that these relations are “frozen”, – the diplomat said. He explained that “the key to solving the present difficulties is in London”. 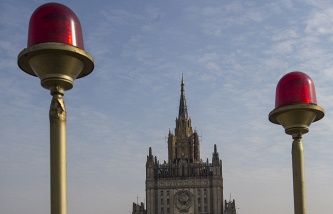 Yakovenko acknowledged that the level of relations “far from normal”, even though “there is some movement forward.” As an example the Ambassador has led on in recent months, a telephone conversation the President of Russia Vladimir Putin with Prime Minister David Cameron, a meeting of Russian foreign Minister Sergey Lavrov with his British counterpart Philip Hammond. “So that specific issues are discussed. But these contacts are infrequent, and they do not affect the way we would like, the General atmosphere of relations,” – said Yakovenko.

According to him, cannot but be regretted that the General background created by the British media, which publishes almost daily sharp and mostly very critical of Russia article, does not contribute to the warming between Moscow and London. “We see these publications as putting pressure on Russian policy due to the fact that on many issues our positions are, first of all, on Syria, in Ukraine, go, – said the head of the diplomatic mission. But instead of adequately reflect the Russian point of view, unfortunately, we hear only the unfounded criticism that cannot but cause regret”.

The interest of business to Russia

Yakovenko drew attention to the fact that British business meanwhile has shown interest in strengthening ties with Russia. “Business speaks out against sanctions, for the development of trade relations between our two countries, actively claimed, both publicly and not publicly – to government,” he said. In his opinion, the fact that the number of British companies that become members of the Russo – British chamber of Commerce and industry increases, “says that British business considers Russia to be a promising partner.”

However, the diplomat acknowledged, the business has become more difficult to do business with partners from the Russian Federation because of artificially erected barriers. “In circumstances where it is the intergovernmental Commission on trade and economic relations, frozen other mechanisms, private institutions is difficult to overcome these tendencies,” said the diplomat.

What do you think about ordinary British people of Russia

The Ambassador drew attention to the fact that the relationship between the two sides is markedly different from London. “Of course, there is a difference. And if, for example, look at the opinion polls made by Newspapers on the topic of the attitude to Russian policy in Syria, more than 60% of the British support this policy”, – said Yakovenko.

Full text of the interview