MOSCOW, 11 February. Prime Minister of Russia Dmitry Medvedev in his speech at the Munich conference on security policy, will assess the economic situation in the world and the challenges that different countries need to join together. 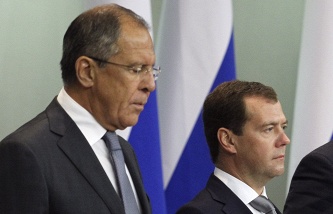 As reported to journalists Deputy Prime Minister Sergei Prikhodko, the Chairman of the Russian government will act on the morning of Saturday, February 13. The topic of the debate – “Modern crises”. It will be dedicated to the development of joint mechanisms to counter crisis situations (Syria, Ukraine, migration) and cooperation in resolving them.

Deputy Prime Minister predicts that the speech of the head of the Russian Cabinet of Ministers will take 15-20 minutes, and then he will answer questions from conference participants.

“Will be interesting”, – said Prikhodko.

Medvedev will also hold a series of meetings with foreign partners. Possible topics of conversation will be the consequences of anti-Russian sanctions and bilateral trade and economic relations. Contact the head of the Russian Cabinet of Ministers with the heads of delegations of Ukraine and Turkey is not considered, said Prikhodko.

The Chairman of Russian government plans on Saturday, February 13th, to start the day in Munich with a business Breakfast with business people from Russia and Germany. As Prikhodko said on the interview invited the heads of major companies, including, for example, “Gazprom”, “Sberbank”, Renova, Basic element, VTB, NOVATEK, Severstal, Siemens, “Robert Bosch”, “Deutsche Bank”, “Nord stream AG”, “Deutsche shell”.

“Probably, the German business uses the rostrum not only for questions about specific projects, but also on sanctions (against Russia)”, – predicts Prikhodko.

Meeting with President of Finland

According to Vice-Premier, Medvedev will arrive in Munich on Friday and will immediately begin a series of bilateral meetings. His first interlocutor will be the President of Finland Sauli Niinistö. “With our Finnish colleagues we have contacts not interrupted, though is tucked to the results of sanctions (against Russia) entered the EU, but political contacts are pretty intense,” – said Prikhodko. He said that on March 29-30 in St. Petersburg, a planned meeting of the co-chairs of the intergovernmental Commission on trade and economic cooperation, which should soon resume its work. “We feel that the Finnish partners are interested to overcome the current stage (difficult relationships), which we were not our (Russia’s) fault,” said the Deputy Prime Minister.

He recalled that “there were times when Finland was ranked first among Russian trade partners, but now she’s only in third place”. Prikhodko said that “the impact of EU sanctions”. Therefore, Medvedev and Niynisto will discuss trade and economic relations, “as the impact of sanctions is felt by the Finnish business community and investors, as Finnish partners are looking at synergies in the energy sector”.

The Vice-Premier reported also on Friday evening, Medvedev hold talks with German foreign Minister Frank-Walter Steinmeier. “Assume that will assess the current stage of Russian-German contacts and cooperation with emphasis on trade and economic cooperation”, – said Prikhodko. He reminded that in January-February 2015 Russian – German trade turnover declined by 35 percent. According to Vice-Premier, “it affects the mood of German business, the field of maneuver for objectively narrowing, exclusive, only which a few years ago, German business held in Russia, now lost”. “I have a feeling that not everyone in Germany likes to give markets because of the crisis situation sooner or later we will reach, and market positions will be lost,” – said the representative of the Russian Cabinet.

He said that Medvedev and Steinmeier will also discuss cooperation in the energy sector, the project “Northern stream-2”, humanitarian ties, and also possibly migration policy of Germany, because “we (Russia) it impacts indirectly feel”.

“On the Ukrainian issue is very high engagement of the German side, continue regular contacts within the framework of the “Minsk process”, but it is the prerogative largely of the Kremlin, Steinmeier but if our assessment of the situation in Ukraine is concerned, we, of course, she will share,” – said Prikhodko.

Conversation with Prime Minister of Bavaria

On Saturday the Prime Minister is scheduled to meet with Prime Minister of Bavaria Horst Seehofer, who recently visited Moscow. According to the Deputy Prime Minister, Seehofer and his colleagues “have a keen interest in the preservation of huge capacity, which in previous years has been gained in the Russian-German trade-economic, scientific-cultural relations, which are now in force entered not on our initiative have penalized”. “(German partners) are Feeling the effects not only from a political point of view, but it has its impact on employment, on investment, so the Prime Minister of Bavaria – one of those politicians who understand the importance of maintaining and preserving the accumulated potential and existing crisis of the state”, – said Prikhodko.

He said that the talks will discuss trade and economic relations in General with Germany and Bavaria. According to the Vice Premier, the turnover of the Bavaria with Russia last year decreased by nearly 40 percent.

“I do not exclude that the negotiations may be affected and migration policy, we are not indifferent to how the government of Bavaria look at the current situation,” – said Prikhodko.

Talks with President of Slovenia

“The foreign policy of Slovenia advantageously differ from some other (European countries), it is quite independent, although it acts in accordance with the common decisions of the EU, but does not hide interest in the development of foreign economic and investment cooperation with Russia” – said Deputy Prime Minister. He reported that Slovenian President Borut Pahor will also be the interlocutor of the Chairman of the Russian government on Saturday.

Prikhodko recalled that the trade turnover between Russia and Slovenia in 2015 decreased by nearly 40 percent. However, Russia and Slovenia “there are a number of joint projects”. He predicts that Medvedev and Pahor will discuss trade and economic interaction, cooperation in energy and humanitarian spheres.

Meeting with the Prime Minister of France

“The most intensive conversation (Medvedev) will be with the Prime Minister of France Manuel Waltz,” believes the Vice Premier. He stressed that in Munich, and Waltz Medvedev will meet for the first time.

Among the topics of conversation Prikhodko called trade and investment ties, energy, joint projects on the territory of the RF, joint projects in industrial, aviation and space fields.

“The Russian side will obviously affect the question of how Western sanctions affected the positions of French business”, – said the representative of the Cabinet. He assured: “We are ready and business support, with the understanding that the French government along with other EU countries aware of (the inconsistency of anti-Russian sanctions)”. According to Prikhodko, “it is not quite correct and is simply meaningless to ask us to Waltz pohudatelnoy about the lifting of sanctions”. “So, of course, the question will not stand” – he stressed.

Deputy Prime Minister has not excluded that will be affected and the construction of the Russian spiritual cultural center in Paris. “We appreciate that without failing and without external influence the construction of a Russian Orthodox center continues”, – said Prikhodko. In his estimation, the overall cultural and humanitarian cooperation between Russia and France, “fortunately, is not affected by any market fluctuations and developing quite normally.”

Without Ukraine and Turkey

The representative of the Russian government noted that the majority of Medvedev’s meetings with Western partners will be held in Munich on their own initiative. According to him, there are still a few queries about the meetings that are currently being reviewed for the possibility to write on the chart.

“We didn’t take the initiative (on the meeting with the representative of the United States),” – said Prikhodko, explaining that with their American colleagues in Munich will meet foreign Minister Sergei Lavrov.

Among the participants of the Munich security conference that the Russian Prime Minister would not meet, Prikhodko called the heads of the delegations of Turkey and Ukraine.

“They (the Ukrainian side) do not take the initiative (meeting), I don’t know who heads the Ukrainian delegation”, – said Prikhodko.

“In practical terms we have not even addressed the issue of a possible meeting with representative of Turkey,” he said, adding that he also does not know who represented Turkey in Munich.

The Munich conference this year will be held in the 52nd time. This forum traditionally brings together heads of States, governments, international organisations, authoritative experts. Russian representatives participate in the Munich security conference since the late 1990-ies. Russia has repeatedly represented by the Secretary of the security Council, Deputy Prime Minister and defense Minister Sergei Ivanov, who now heads the Kremlin administration, as well as the Minister of foreign Affairs Sergey Lavrov. In 2007 the report “the Role of Russia in world politics” was made by the President of the Russian Federation Vladimir Putin.