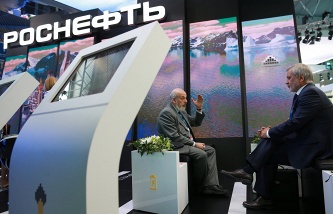 Rosneft has signed several agreements in the framework of SPIEF

The document provides for joint analysis of the working groups of the two companies possible formats of the organization of the joint venture. The sides highly assess the prospects of realization of the project in view of the considerable synergies of such an Alliance in the field of international transport of oil and oil products: “Rosneft” is one of the global leaders in the extraction and processing of hydrocarbons, and Pietro Barbaro, a longtime partner of Rosneft, and a leading company in the field of tanker transport, as owning its own fleet, and extensive competences in the field of Maritime logistics and storage of hydrocarbons.

The sides expect legally-binding documents on the formation of the transaction, if approved companies the results of the analysis will be signed for 2016.

September 1, 2015, the Russian joint venture JSC “NK “Rosneft”, LLC “Sberbank Investments” and Pietro Barbaro S. p.A. closed the deal on acquisition of Russian shipping assets of the group Pietro Barbaro (100% of the group “Prime shipping”). “Prime shipping” is one of the leaders of the Russian market of river transportation of oil and oil products, with the youngest river fleet (28 modern river tankers, barges and tugboats). At the moment the company “Prime shipping” is mainly focused on transportation of oil products of OJSC “NK “Rosneft” on internal waterways of the Russian Federation and adjacent seas. During interaction with the enterprises of “Rosneft” fleet “Prime shipping” transported more than 11 million tons of oil products the Saratov refinery and the Samara group of refineries.

Today “Prime shipping” owns and operates the most modern river fleet in Russia an average age of about six years, built at Russian and foreign shipyards in the period 2004-2012 In the property “Prime shipping” there are 18 river tankers with the deadweight of 5 thousand to 7.5 thousand tons and five barebacking compositions. In addition to its own fleet of “Prime shipping” operates five vessels to third party companies, including tankers, barges and supply vessel.