The official representative of the Russian defense Ministry Igor Konashenkov stated that the assault aviation of the air force of the United States on Wednesday, 10 February, bombed the Syrian city of Aleppo. Yesterday, Pentagon spokesman Steven Warren said that, as a result of bombardment of the Russian air force had destroyed two hospitals in Aleppo.

“Yesterday at 13:55 Moscow time from the territory of Turkey, the shortest course directly into Aleppo in the Syrian sky came two attack aircraft of the U.S. air force A-10 and “full” has worked on facilities in the city,” — said Konashenkov (quoted by “Interfax”).

“We didn’t have enough time to accurately determine the affiliation of those nine facilities which they bombed yesterday in Aleppo”, he added.

The representative of the Russian defense Ministry recalled the statement made the previous day by the representative of the Pentagon. “As a result, according to him (Stephen Warren. — ) supposedly around 50 thousand Syrians were deprived of vital services for them”, — said Konashenkov. In his words, “neither the time nor the origin of these hospitals, nor the sources of that information” the American side was not represented.

Konashenkov stressed that “the Russian aircraft near the city of Aleppo yesterday.” “The immediate aim was to more than 20 kilometers from the city. And over by the city yesterday were actively flown only aircraft of the so-called coalition antiepilepsy: planes and pilotless,” said he.

As stated earlier, representative of the Pentagon, the strikes of Russian aviation destroyed two hospitals in Aleppo, denying medical care to about 50,000 people. The representatives of “Doctors without borders” also stated that the airstrike was inflicted on the hospital in the southern city of Daraa, resulting in were killed three and injured six people.

Earlier, representatives of human rights organizations and Western countries have repeatedly put forward against Russia the charges in the attacks on the moderate opposition and civilians in Syria. Moscow these accusations were rejected, indicating that Air and space forces strike blows only on the position of the banned in Russia “Islamic state”.

The offensive of the Syrian army in Aleppo governorate started in early February. Government troops managed to seize the city Baden and Retian, closer to 25 km to the border with Turkey and cut an important highway, at which opposition to the regime of Bashar al-Assad “free Syrian army” (FSA) and its supporting organization “Frente al-Nusra” (banned in Russia) received weapons and ammunition.

On 9 February the UN warned that the situation in Aleppo may cause cut off from food supplies and humanitarian aid can be up to 300 thousand people. 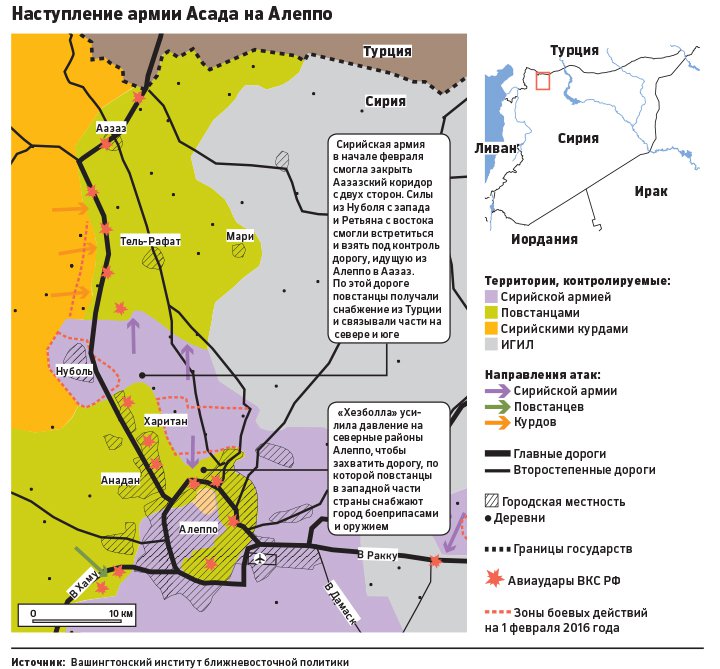