MOSCOW, 12 February. Russia, thanks to our reserves was prepared for the crisis and defended better than many other countries, said Chairman of the state Duma Sergey Naryshkin. 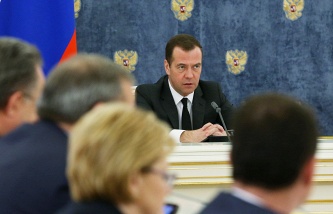 The Ministry of Finance: measures of fiscal consolidation and deficit reduction will strengthen the ruble

Medvedev: the current version of the plan measures to support the economy prior

“Experts and media outlets now practise in the calculations – the economy has reached the lowest point of the recession or not, for what period of time will suffice our financial reserves, looking for Parallels between the current situation and the economic crises in 2008 and 1998,” said the speaker at the parliamentary hearings on the theme “On priority measures of the RF Federal Assembly, RF government and the Bank of Russia to ensure economic growth.”

“I would like to emphasize that every crisis always and very different from the previous one, and the reserves, in fact, created to overcome them, and because Russia has already prepared and defended better than many other countries, is also sensitive to the dynamics of commodity markets”, – stressed Naryshkin. In his view, the very existence of our country has significant reserves “expands to maneuver, that is, improves the stability”.

Naryshkin warned against attempts “to get into the retirement and savings of people” for the sake of replenishment of the budget, especially without the consent of the citizens.

“The most important principle of anti-recessionary work consider the inadmissibility decision of the budgetary problems at the expense of citizens”, – said the speaker.

According to Naryshkin, the people “and thus feel the impact of the crisis on the decline in real income, purchasing power of wages and pensions”. “The state is obliged to support its citizens, in addition to protect the most vulnerable categories and to invent different ways to get into the retirement and savings of people, even without their consent,” he said.

“The demotivation of employees and the compression of consumer demand to prevent, of course, impossible”, – emphasized the Chairman of the state Duma.

The Chairman Of The State Duma

encouraged to prevent the deterioration of the working conditions of small business in current economic conditions.

“In the current environment of the so-called regulatory impact assessment power solutions must guarantee the sustainability of the business environment in the country, especially small businesses,” he said.

According to Naryshkin, this segment, “on the one hand, vulnerable in a crisis, and at the same time very mobile, and able to survive even in the most difficult conditions”. “It is unacceptable to add to the objective difficulties of the new bureaucracy, but rather should expand the freedom of economic activity, to facilitate registration procedures and reporting, to increase the availability of loans,” – says the Chairman of the state Duma.

“The effect of such a policy appears not only in the growth of revenue by increasing the base, but in the sentiment of the business community, support self-confidence and strengthen the credibility of the state,” he said.