ST. PETERSBURG, 12 February. The big port of St. Petersburg the first in Russia will go to work on the technology of electronic customs portal “seaport” is designed to improve the competitiveness of seaports of the Russian Federation and process optimization design. This was announced by Deputy head of FCS Ruslan Davydov. 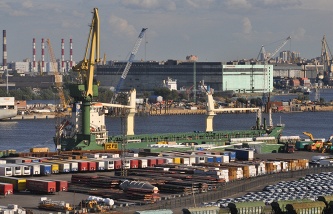 Sea port of Saint-Petersburg in 2015 has reduced transshipment by 2.9% to 7.9 million tonnes

According to Deputy head of the FCS, a new customs web-site is focused on preliminary informing regulatory authorities on goods shipped to the territory of the Customs Union by sea transport. This will allow all regulatory agencies to work in single window mode, which will facilitate the coordination of their work, forgive procedures for participants of foreign economic activity and reduce the residence time of goods in port.

“Preliminary information should greatly simplify the life of business, which will improve our position in the ranking of international trade”, – said Davydov.

The new customs software product will give control authorities to take a decision on unloading of goods from the ship until its arrival in port, to request the necessary permits in advance. Thus will be excluded delay of vessel in port and the time of customs clearance of goods will be reduced to a minimum.