The biggest seller of vodka in Russia in the end of 2015 was the “Status-group”, according to data provided by the two major alcohol companies on condition of anonymity. Data are based on retail audit research firm Nielsen in October—November 2015. On this information, the share of brands from the portfolio of “Status-group” for the reporting period amounted to 18.4% in volume and 15.1% in monetary terms (see table). In volume terms the sales of “Status-group” surpassed the combined sales of the two former market leaders — the “Synergy” and Roust (7.8 and 7.7% respectively). Representatives of all three companies declined to comment. Sources in Roust and “Synergy” have confirmed the correctness of the data. The press service of the Nielsen on Thursday evening was unable to immediately comment on the data provided by companies.

Among separate vodka brands leadership for the year retained the brand “Five lakes” Alcoholic Siberian group (ASG) Andrew Archer. By the end of November its market share in volume terms was 4%. The second most popular vodka in Russia — “white” (brand “Synergy”) has lagged behind marginally to 3.9%. But closing the three earlier “Green mark” (owned by Roust) by the end of 2015 was dropped three positions down to sixth place. It drove the three best-selling brand “Status-group” — the “Good bear” (3,6%), “Kalina Krasnaya” (3,5%) and “Staraya Marka” (3.3 per cent). All these vodka brands are sold in the cheapest price segment — from 185 rubles per half-liter bottle (minimum retail price) to 200 rubles.

As follows from the data of Rosstat, retail sales of vodka in Russia in 2015 decreased by 3.8% to 862,8 million L. This is approximately the rate of decrease in production over the past year, domestic factories produced 639,3 million liters of vodka, which is 4% lower than a year earlier. The difference between output and retail sales recorded in Russia every year. In the Russian alcohol regulation Department (RDA) believe that this difference results from the presence in retail a large volume of illegally produced alcohol.

The LRA Director General Mr Igor Savelyev believes that “Five lakes” managed to hold the lead thanks to high consumer loyalty. However, he acknowledges that sales of the brand is still falling: “sales of the brand over the past year, as have all of the leading brands show negative dynamics,” — said Saveliev. He notes that in the conditions of falling of solvency of the population of the consumers is forced to “compromise”, that is to buy cheap vodka.

According to the data provided , vodka brands “Status-group” has already gained a leadership position in some cities. So, “Good bear” — the leader of sales in St. Petersburg, the “Old mark” the leader in sales in Rostov-on-don, Volgograd and Voronezh. In other cities, except Kazan, the company’s products are confidently included in the top ten, yielding, as a rule, only cheap regional vodka brands, such as “Perm” (Perm), “Sormovo” (Nizhny Novgorod), “Fair” (Ufa), “triumphant” (Samara) and others.

“The main criterion of choice in the vodka category is the price, — said the Director of the group companies of the food market Nielsen Sergei Glamazda. — Over the last three years the total share of sales leaders category in volume terms decreased due to the increase in sales volume less than the major brands available at the lowest retail price, some of them managed to double its sales over the past year — for example, “Good bear” or own-brand retailers”. 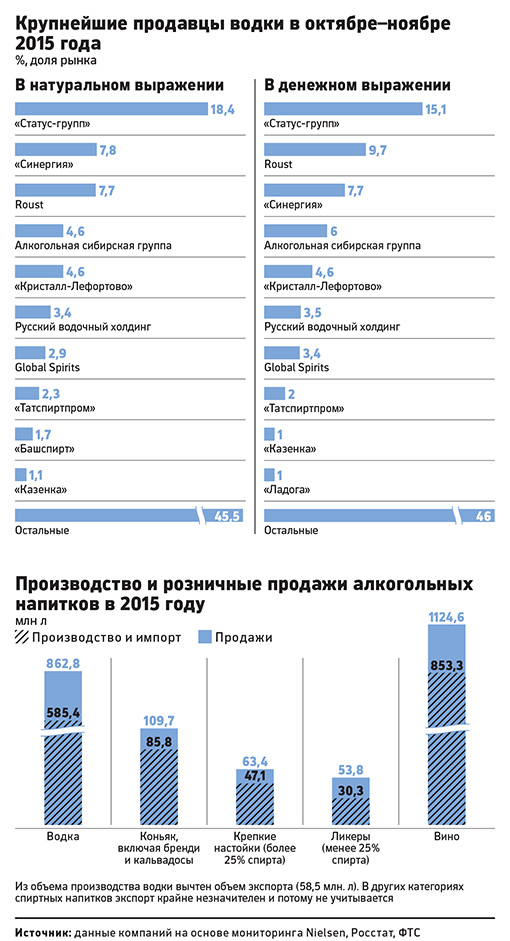 As “Status-group” became the leader

“Status-group” was registered back in 2012, but became a prominent player in the market since 2014 when she took over the portfolio of brands distributor “Zolotaya Manufaktura” (“Squirrel: I came!”, “Height”, “Kalinka”, etc.), and also the brand of the state company “Rosspirtprom”, the trade of which has been the company WEDC. Revenue “Status group” in 2014 amounted to 12.8 billion rubles., net profit — 38 million rubles According to the data SPARK, owners of the company are Cyprus Larekono Assets Ltd and two Russian companies — “Astarte” and “Start Capital” belonging to the same Cyprus-based company. According to the register of legal entities of Cyprus, Larekono Assets Ltd 100% owned Ariantor Logistics Ltd, registered in the British virgin Islands (BVI).

In “Status-group” is not called the name of the owner, indicating only that “the beneficiary company is a well-known businessman, not afishiruet their attitude to the company”. Three sources in the alcoholic market from among top managers of private companies in 2015 were told that the creation of a “Status group” is the former co-owner of metalloinvest, Vasily Anisimov, the billionaire (43-e a place in rating Forbes with wealth of $2 billion). But Anisimov this information is not confirmed, noting that only “takes stock of the distribution business of the company”.

Changes in the Russian alcohol market

90,07 million litres of spirits has released “Tatspirtprom” in 2015. The company became the new leader on manufacture of strong alcohol. Second and third places were occupied by perennial market leaders “synergy” (of 86.2 million liters) and Roust (72,16 million liters)

3.8 million litres of still and sparkling wines released in 2015 wine holding “Ariant”, which became the new leader of the wine market

8.7 million litres of wine were imported to Russia in the first half of 2015, of which 7.7 million — from Abkhazia

4.5 billion rubles is equal to the amount of the credit facility, which was opened by “Rosspirtprom” (CPRS) in early 2016 in the Possibility to buy eight distilleries. After completing the transaction, the CPR became the largest manufacturer of alcohol in Russia

Sources: Rosstat, the working papers for the meeting of the government Commission

For the first time leadership “Status group” in retail sales of vodka in Russia was recorded Nielsen in April / may 2015. Breakthrough little-known company in troubled times, the vodka market (the fall in output, the dominance of illegal products and surrogates) market participants associated with that company somehow managed to negotiate with major Federal retailers about selling its vodka in the cheapest price segment. Large companies admitted that they can’t sell their produce at such prices as it will lower the cost of their product.

In the “Status group” low price explained “compromise” with the networks. “Low price on the shelf in the retail network is the result of a mutually beneficial compromise. We offer networking products at the lowest price (without marketing and other nonproduction cost components) and make reasonable margins, — has told in a press-service of the distributor. — We occupy a considerable part of the circulation network, and this helps us to negotiate.” As follows from the data based on the data from Nielsen, the main sales channel for “the Good bear” and other brands of the company really is the online retail. The proportion of brands “Status group” in the retail network by the end of the year reached 23% — that is, every fourth bottle of vodka, purchased in the nets, was under the brand portfolio of “Status-group”. Sales in networks, “Status groups” overtaken Roust and “Synergy” and in volume terms (23 12.1%, the two competitors) and money (to 16.9 vs. 13.9 percent).

As explained earlier in “Status-group”, the reason for the success of the company “in a well-chosen strategy”. The second part of the recipe for a successful strategy — the company is an exclusive partner of the state company “Rosspirtprom” which in 2002-2009, he worked as the head RAR Igor Chuyan. It is PAP at the end of December 2014 has issued the order on reduction of the minimum retail price for vodka from 220 to 185 rubles, the main beneficiary of which in fact became a “Status group”.

In November of last year the Chairman of the Federation Council Valentina Matvienko has proposed to check the information about the relationship with the business leadership of the PAP, including the head of Department Igor Juana, with alcohol business. “There are a lot of rumors about your affiliation with alcoholic business, about 30 men of your security, some kind of machines. Perhaps this is a rumor, perhaps, your enemies slander”, — said Matvienko, referring to the presence at the meeting of the upper house of Parliament Cuanu. Then the head of the Federation Council proposed to Cuanu to think about the expediency of further stay in the chair of chief regulator of the alcohol market. The PAP representative said that so far tests were not.