MUNICH, February 13. Kiev is not willing to honestly fulfill the political part of the “Minsk-2”. This was stated by Russian foreign Minister Sergei Lavrov, speaking at the Munich security conference. 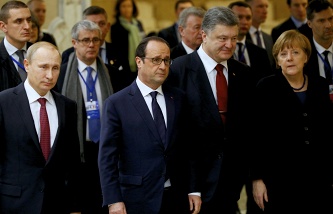 “Yesterday was one year from the date of approval of the Minsk kompleksa measures for the settlement of the Ukrainian crisis – the document, approved by the UN security Council. However, the implementation of key political provisions essentially has not begun, – said Lavrov. – Mainly owing to the unwillingness of the Ukrainian leadership to pass honestly its part of the journey and aspirations of Kiev the end without finding excuses to avoid commitments”.

“It’s good that the unacceptability of such behavior seems to be beginning to understand in Europe, even in the US, as shown by the speech of Secretary of state John Kerry for his specific political correctness for the sake of fashion Russophobia in certain capitals”, – said the Minister.