MUNICH, 12 February. Prime Minister of Russia Dmitry Medvedev has arrived in Munich, where he will participate in the conference on security policy. The Prime Minister will deliver a speech and meet with foreign counterparts and businessmen of Russia and Germany.

As reported to journalists Deputy Prime Minister Sergei Prikhodko, the Chairman of the Russian government to speak at the meeting on Saturday, February 13. The topic of the debate – “Modern crises”. It will be dedicated to the development of joint mechanisms to counter crisis situations (Syria, Ukraine, migration) and cooperation in resolving them. “Will be interesting”, – said Prikhodko. 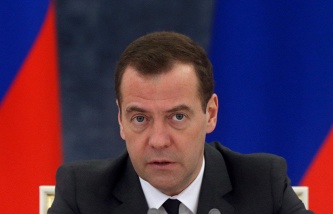 At the Munich conference traditionally attracts heads of States, governments, international organisations, authoritative experts. Russian representatives participate in the Munich security conference since the late 1990-ies. Russia has repeatedly represented who was then Secretary of the security Council, Deputy Prime Minister and defense Minister Sergei Ivanov, who now heads the Kremlin administration, as well as the Minister of foreign Affairs Sergey Lavrov. In 2007 the report “the Role of Russia in world politics” was made by the President of the Russian Federation Vladimir Putin.

Medvedev in Munich scheduled series of bilateral meetings. The first companion of the Russian Prime Minister on Friday will become the President of Finland Sauli Niinistö. Niynisto and Medvedev will discuss trade and economic relations, “as the impact of sanctions is felt by the Finnish business community and investors, as Finnish partners are looking at synergies in the energy sector”, said Prikhodko.

Also on Friday, Medvedev hold talks with German foreign Minister Frank-Walter Steinmeier. “Assume that will assess the current stage of Russian-German contacts and cooperation with emphasis on trade and economic cooperation”, – said Prikhodko. He said that Medvedev and Steinmeier will also discuss cooperation in the energy sector, the project “Northern stream-2”, humanitarian ties, and also possibly migration policy of Germany, because “we (Russia) it impacts indirectly feel”.

In the programme of work of the head of the Russian Cabinet in Munich on Saturday includes talks with Prime Minister of Bavaria Horst Seehofer and President of Slovenia Borut Pahor. It is not excluded and other contacts, but not with representatives of Ukraine and Turkey, said Prikhodko.

Medvedev will also hold a Breakfast meeting with businessmen in Russia and Germany.