MOSCOW, February 13. The Chairman of the Duma Committee on international Affairs Alexei Pushkov believes that the approach Secretary of state John Kerry to the implementation of the Minsk agreements drives the situation into a dead end, because the US does not specify what needs to be done in the framework of its commitments to Kiev.

The Kerry approach to Minsk-2 leads to a dead end: he enumerated all that have to do Russia, but never said what to do in Kiev.

Previously John Kerry, speaking at the Munich security conference, said that Russia in the context of the Ukrainian crisis at the moment, have a choice – to fulfill the Minsk agreements, or to continue to deal with economic damage from sanctions. The head of U.S. diplomacy said that the restrictive measures introduced with the aim of protecting “fundamental rights” of Ukraine. 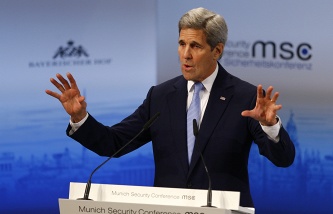 Kerry: Russia must change its choice of targets in Syria

At the same time, “the Ukrainians also have a lot to do,” Kiev must fulfill its part of the agreement, Kerry said, without becoming to further develop this thesis.

A year ago in the capital of Belarus signed a set of measures for implementation of the Minsk agreements on settling the situation in Ukraine. The document was endorsed by the leaders of “Norman Quartet” and has received the support of the UN security Council. A complex of measures in details painted a timetable for establishing peace and resolving the political crisis in the Donbas till the end of 2015. However, most of the points of the plan fully and have not been implemented. Political commitment of Ukraine according to the Minsk agreement are the adoption of amendments to the Constitution, to be agreed with representatives of certain districts of Donetsk and Lugansk regions, in the adoption of the Amnesty law, the local elections in the region.