MOSCOW, 12 February. Russia will continue its counter-terrorism operation in Syria, despite the agreement of the International support group Syria (MGPS) ceasefire as they relate to the conflict the government and the opposition, instead of fighting terrorists. This was stated by first Deputy Chairman of the Federation Council Committee on international Affairs Vladimir djabarov, commenting on the decision MGPS at the meeting in Munich. 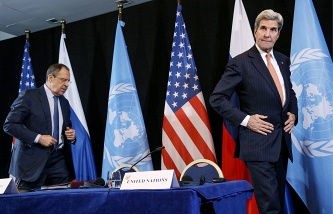 “Despite these agreements, Russia will continue its counter-terrorism operation by force, because the known locations and locations of the ISIL (the former name is forbidden in the Russian Federation “Islamic state”), the way of transportation to them of munitions, goods, and manpower”, – said the Senator. “These agreements concern only, as I understand it, warring factions in Syria, but do not apply to terrorists who are in Syria and partly in Iraq”, he explained. “We work at the request of the Syrian President, struggling with terrorists who are ISIS in Syria,” he said.

Thus djabarov appreciates achieved in the Munich agreement. “The ceasefire between the warring factions in Syria will always be welcomed, because it killed innocent people, destabilizing the situation in the country,” the Senator said. However, the prospect of compliance with the truce cause he’s “not optimistic”. “Too many groups that, on the one hand, have positioned themselves as anti-government, antiasadovskie, on the other hand, some of these groups are openly terrorist nature,” explained djabarov. He was confident that in this matter, “we need to clearly separate the wheat from the chaff”. “It has to agree the major world powers who are fighting with ISIS,” said the MP.

Earlier, Russian foreign Minister Sergei Lavrov said that the participants in the Munich meeting MHPS agreed that “the working group co-chaired by Russia and the United States will develop the modalities of a ceasefire in Syria in a week”. In addition, “the mandate of this group included identifying areas that are under the control of terrorists”, the Minister added. In the words of U.S. Secretary of state John Kerry, all the band members expressed willingness “to work with Russia in a manner that affects the political, humanitarian and military components of this problem.”